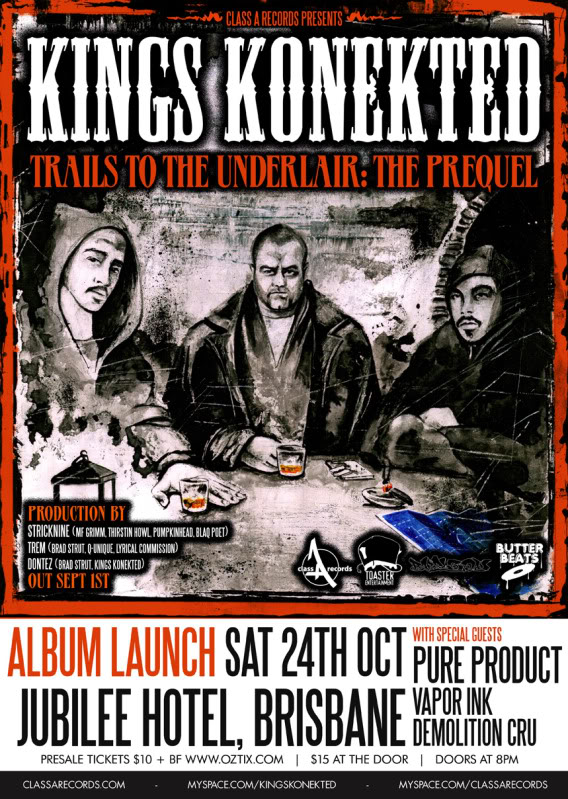 I have to say we have slept a bit on this release.  So to make up for it were giving you a bit of a post from the guys myspace page. There has been a great response from everyone who has peeped this album and for a mixtape release, we think it’s a huge effort. The buzz on ozhiphop.com has been huge and some big head including 360 think these guys are ‘fucking good’.

If your well familar with Kings Konekted you can catch the guys in Fortitude Valley, Queensland, at the Junilee Hotel October 24th. Prue Product, Vapor Ink and Demolition Cru are the special guests.

After releasing albums from international artists such as MF Grimm, KRS-One & Thirstin Howl III, Queensland-based Class A Records, in association with Toaster Entertainment, is proud to present its first all-Australian product: the debut street album from Kings Konekted.

Trails to the Underlair: The Prequel announces the arrival of two young but supremely talented MCs, Dontez and Culprit, who flex rhymebooks full of wordplay to immediately captures the listener’s imagination. They are backed by established DJ/producer Stricknine, who has no doubt about the skills of his protégés. “Out of all the people I have worked with, from New York to LA to the UK, I can honestly say these guys are on the same level as the best I have produced for,” he says.

These MCs don’t waste their breath on empty boasts. Dontez and Culprit have been working together since their early teens to perfect their craft. Since joining forces with Stricknine in 2006, they have been working tirelessly in Class A Studios and the results appear here and on their forthcoming official album. Their intricately structured rhymes are deeply personal, strikingly insightful and at times brutally dark. On The Prequel, Dontez and Culprit show a cutthroat mic style that has echoes of Melbourne pioneers Prowla and Lyrical Commission, but demonstrates a realm of experience that is entirely their own.

Stricknine has been touring and producing since long before launching Class A Records in 2003. He produced the majority of MF Grimm’s 2007 album The Hunt for the Gingerbread Man, a concept album that was hailed an instant classic in reviews from the Source and XXL, where it received higher ratings than Nas’ Hip Hop Is Dead and Eminem’s Re-Up mixtape. It scored heavy airplay worldwide, including regular rotation from tastemaking stations such as New York’s Fat Beats. The lead single “Earth” reached number 1 on both the Rapattacklives and Rapnetwork charts while the album made it to 13 on the CMJ album charts. Stricknine has also created beats for Blaq Poet, Celph Titled, Kool Keith, Thirstin Howl III and many more.

More than just a mixtape, Trails To The Underlair: The PrequelLyrical Commission’s acclaimed beatmaker Trem and KingsKonekted’s own Dontez, whose remix of the Brad Strut/Lyrical Commission heater “Bounty Hunterz” held its own against mixes from international talents like M-Phazes and Jehst on Strut’s Rejuvenation remix album.

Kings Konekted have torn up stages with the world’s best, Lord Finesse, Masta Ace, Necro, Planet Asia and Roc Raida, as well as the cream of the Australian scene. On more than one occasion as support act, they’ve had a bigger crowd on the floor than the headliner. They’ve now recorded with some of the most vital artists in the world today, including Blaq Poet, Ty Nitty, MF Grimm, Pumpkinhead, Brad Strut, Prowla, Trem and Ciecmate and Newsense.

With the official debut album Corrupted Citizens being fine-tuned in the studio by Stricknine, the rise of Kings Konekted has just begun. Trails of the Underlair: The Prequel is a taste of what’s to come.