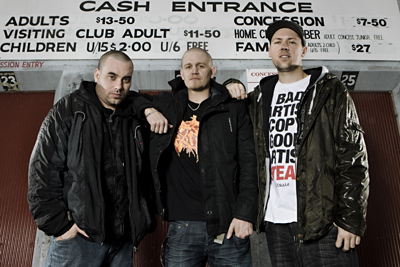 The Hilltop Hoods Initiative will give one emerging Australian hip hop artist a career starting opportunity to the beat of $10,000. The grant is aimed to fund costs associated with manufacturing and releasing a CD of at least five original songs. Proudly brought to you by Aussie hip hop giants The Hilltop Hoods and APRA, it is open to an emerging Australian hip hop artist who has not released an album professionally/ commercially.

Who can apply?
To be eligible for the HTH initiative you must be:
– Emerging Australian based Hip Hop artists or groups who have not released an album professionally/commercially.
– Applicants of any age (but it is expected that you will be in the early stages of your career).
– Applicants must be Australian citizens or must have been legal residents of Australia for the past two (consecutive) years.
– Previous recipients of the HTH Initiative are not able to apply.
– Applicant must be an APRA member or have at least made application to join APRA. For more information on joining APRA go to http://www.apra-amcos.com.au
– APRA employees (and their immediate families) are ineligible to enter.

What is the grant for?
The grant is for costs associated with manufacturing, marketing and distributing a CD of at least five original songs. This can include:
– Mastering
– CD artwork/design
– Marketing and promotional materials
– Postal and administrative costs associated directly with the project
– Manufacturing
Please note, the grant does not cover:
– Recording costs
– Merchandising
– Equipment purchases