It’s time yet again for the allaussie hip hop’s monthly cook up. This time the man behind the hotplate is none other than emcee Urthboy. Let’s get right into it with his:

My best version of this pie came about the night after I cooked a pot roast, using the left-over meat, but you can use casserole steak or whatever red meat you like.

Ingredients – change portions to suit the size of the pie
* Steak – I would say, heaps. Like, over 1kg for sure. Don’t starve your peoples – that’s a low act. Keep em happy and they won’t notice your pathological split personalities.
* Half cup of flour
* 250 grams mushrooms
* one onion
* a chopped carrot or two – you can look em dead in the eye and know you’re 100% fit and healthy cos you put one or two greens in your pie.
* garlic – one or two cloves
* some parsley to help defeat the treacherous garlic post meal
* Puff pastry – at least a few sheets depending on pie size. Too much pastry is a shocker, not enough and the pie falls apart. This is where you must go it alone.
* cup of red wine – maybe two
* cup of beef stock (I think this is one or two of those little bastards you buy in cubes)
* small can of tomatoes
* olive oil – tablespoon or 2
* salt and (a lot of) pepper
* couple sprigs of rosemary – we’re not making petrol station pies here lads.

If it’s not leftovers from last night, proceed as below. If it is, ignore all the info about flouring and cooking the steak.

– Toss cubed steak in bowl with flour, cover evenly
– brown steak and remove
– add wine and tomatoes with stock – medium high
– stir in carrots and mushrooms, onion, garlic and rosemary
– after 10 mins add meat and lower heat – cook covered for an hour
– stir every now and again – the sauce should be thicker now – cook slowly with lid off for as long as it takes for the sauce to thicken up (no more than 30 minutes you don’t have all night)
– cool for an hour (if you have patience)
– preheat oven to 180
– grease pan and place pastry inside, make sure you press the edges firmly
– put the damn pan in the oven making bottom layer and edges of pastry half cooked
– remove pan – fill it with your sauce and meat mixture – cover with pastry and press edges firmly
– use excess pastry to write your name or your tag on the top. You should add these trimmings before you cover the pie as it’s easier to press these parts into the pastry when flat on the bench. This is probably the most important thing to get right.
– cook for about half an hour in the oven

You could add some green vegies on the side, maybe potatoes or whatever. But really, why would you?

In the name of late nights and lost mornings, Urthboy is coming to your town on the Sneakquel Tour throughout April and May 2010. Nominated for this year’s Australian Music Prize (one of the only artists nominated twice) Urthboy is joined on stage by the incandescent Jane Tyrrell and DJ/producer Elgusto.
Their Spitshine Tour in Oct/Nov 2009 was a huge success playing to over 10,000 people.
After successfully navigating their way through the Australian Summer Festival collision course, the time for a headline tour with visuals, dance moves and new tunes has come.
In support is gun-lyricist Mantra, whose debut album drops soon on Obese Records. One of the most gifted emcees in the country, see why he’s the buzz of the hip hop community.

Tickets on sale from urthboy.oztix.com.au 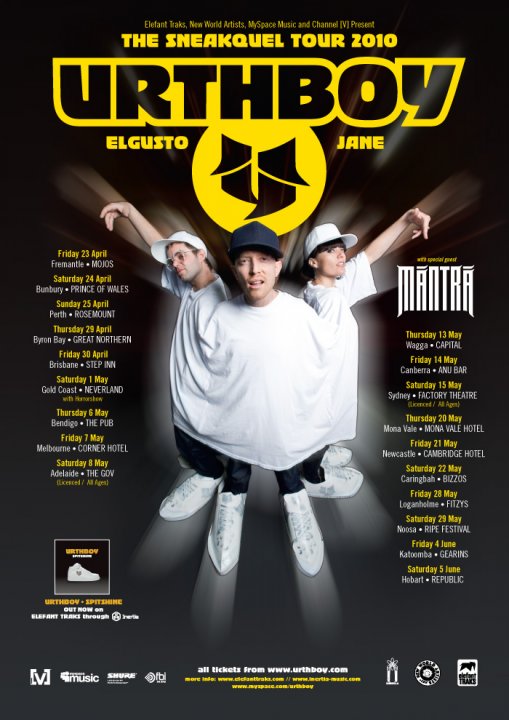