The Last Kinection are an Indigenous Hip Hop trio made up of brother and sister Weno and Nay, as well as DJ Jaytee. No strangers to the music industry, The Last Kinection have had significant success and experience for years before the group formed. Naomi (MC Nay) was one half of R&B Pop group Shakaya and signed with a major multinational label at the age of 16, quickly climbing the ARIA charts and selling platinum singles and a debut album. Joel Wenitong (Weno) and Jacob Turier (Jaytee) were on the rise as part of the infectious group Local Knowledge (Music Oz – Best Indigenous Artist in 2005; Best Group in the 2005 Deadly Awards) before it folded.

The group, its music and image is a way of expressing their pride and honor, respect and knowledge for their culture and elders. Drawing influence from their Kabi Kabi heritage, TLK represent what it is to be Aboriginal in today’s Australia with great intelligence, integrity and humour.

“The Last Kinection are an incredible Australian group – their live show is a must-see, their melodic production is contagious and their songs are powerful. TLK are one of the most important groups in the country. I cannot wait to work with them on the release of their next record.” – Urthboy 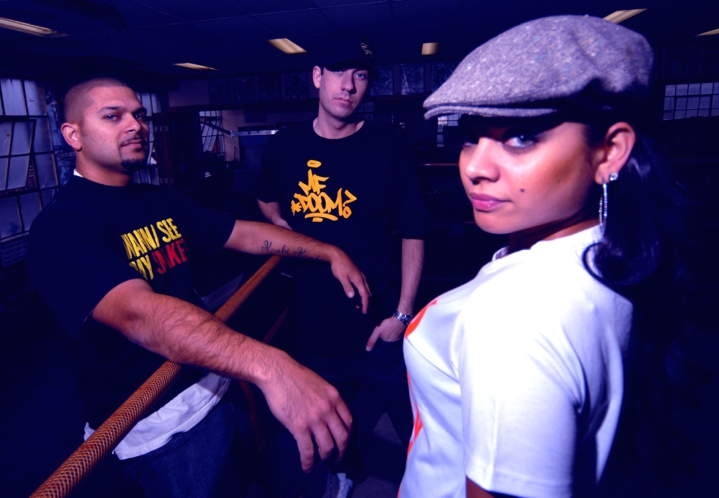 Disheartened and frustrated, all three quickly moved on to form The Last Kinection, and the adventures of the inspired trio began. Naomi and Joel come from a large family belonging to the Kabbi Kabbi people of South East Queensland. At a frighteningly rapid pace they were losing their elders to the cycle of life. This reality was the reason behind the group’s name. The Last Kinection’s debut album Nutches (Pronounced Nu-tches (‘u’ as in Put), was released in 2008 and featured heavily on triple j and community radio across Australia.

The band established themselves as a serious lyric-driven group with melodic production and a progressive hip hop aesthetic. Whilst tackling the big issues facing Indigenous (and non-Indigenous) Australia has become part of the group’s mantra, their knack of easing tension with great humour and captivating entertainment is what gives TLK’s personality such charm.
It’s this attention to entertainment and stagecraft that has resulted in an explosive live show. They’ve played The Peats Ridge Festival, The Dreaming, Groovin’ The Moo, Field Days, Sydney Festival and many more. After being invited by Paul Kelly to appear on the Cannot Buy My Soul – Tribute to Kev Carmody compilation, they played an important role in the triumphant shows at the State Theater and Brisbane’s River Stage. TLK won legions of new fans after being invited by The Herd to be main support on their soldout national tour of 2008. It was the morning after the last show of that tour that may be TLK’s defining moment. They were involved in a horrific car accident after the car they were driving was forced off the road resulting in a near death experience. Nay was assumed dead at the scene. They’ve since been profiled by TV show Crash Investigation Unit about their lucky escape. With spirit and determination the group rehabilitated and returned to support Public Enemy in early 2009 and have not looked back.

The Last Kinection have a close connection to the community, running music workshops covering music business; production; singing; emceeing and DJ techniques; songwriting and performance. In these workshops the aim is to encourage, guide and give confidence to upcoming artists; allowing them to express themselves in a positive way; or to assist them in healing. In 2010, The Last Kinection teamed up with Elefant Traks and their second album The Next of Kin will be released through the label in the second half of the year