Hifi & Trent Slingshot presents Celph Titled with Blacastan plus Action Bronson. With 3 massive dates just announced for their Australian tour including stops Adelaide, Melbourne and Sydney this will be one gig hip hop heads must make it to. Heads will not only be treated to the hip hop goodness that Celph Titled and Action Bronson will be deliverying, Australian giants Brad Strut. 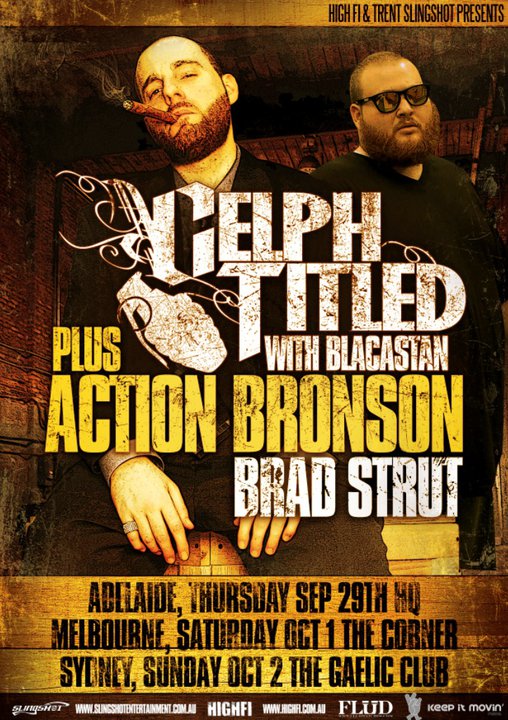 Celph Titled (USA)
The over-the-top, bazooka wielding action star of hip hop, word master Celph Titled began his professional entrance into the rap game as a teenage lyricist and local production staple during the late 90’s indie 12-inch vinyl boom.
After relocating to New York City, fresh out of high school, he began working as an in-house producer and A&R. All of Celph’s early records were released on vinyl, including tracks from his original group, Equilibrium, and singles from career-long partner-in-rhyme, Apathy. He has been the leading member of two legendary crews, The Demigodz and Jedi Mind Tricks’ Army of the Pharaohs collective and has become well known for his standout quotable-filled performances and hard-hitting East Coast-style production featured on the crews’ respective blockbuster releases. Notably, in 2004 Celph featured on Australia’s own Terntable Jediz “All Out War EP” title track.
In 2005, he was invited to be an official part of the Fort Minor project, which was executive produced by Jay-Z, which lead to a nationwide tour with Fort Minor in 2006. Since then, Celph has released a unique compilation entitled, “The Gatalog”; a four-disc set which captured a long discography of Celph’s guest appearances and freestyles, going all the way back to his early releases from 1998. This is still a top-seller to date! He subsequently worked with ‘Diggin’ In The Crates (D.I.T.C.)’ multi-platinum producer, Buckwild, on his critically acclaimed 2010 debut solo album, “Nineteen Ninety Now”.

Now embarking on a focused solo career with over ten years of industry know-how, respect, international touring and die hard loyal fans, the “Celph”-made independent pastor of punch lines sets out to solidify his stamp on the scene as a major factor once and for all. Celph is sure to knock out Aussie fans with newcomer, and leading emcee in his own right, Blacastan.
Celph Titled Website  ||  Twitter

Action Bronson (USA)
Qualified chef-turned-rapper from Queens, New York, newcomer Action Bronson has built up a loyal following since he decided to leave the kitchen for a recording studio only 18 months ago. However, the man Rolling Stone magazine recently called the “Artist to Watch” didn’t stray too far from the kitchen, as he is well known for rapping about his culinary delights. His experiences lend a unique flavour to his rhymes, where you’ll find witty mentions of duck prosciutto, Tunisian olives, smoked brisket and other delicacies along with vivid imagery of a modern-day Viking pillaging his way across New York.
Actions recently released debut studio album “Dr. Lecter”, (which is available via digital download) has been described as “a peppery stew of food jokes, weed talk and pro wrestling shout-outs” drizzled liberally over his producer/DJ pal Tommy Mas’ deft boom-bap loops, akin to the classics from the late 80’s / early 90’s Hip Hop era. Action delivers a variety of techniques that are far beyond the capacity of someone who only picked-up the pen a mere three years ago.
It’s impossible to hear Action Bronson’s music without noticing that he sounds a lot like the Wu-Tang Clan’s Ghostface Killah. Bronson is by no means a copycat, but the resonance and urgency of his delivery could sound very similar to those of the Staten Island originator. Featuring on Wu-Tang Clan’s recently released “Legendary Weapons”, Ghost and Bronson appear on a track together, titled “Meteor Hammer”, with Boston MC, Termanology. Critics are adamant that it is pretty easy to tell the two apart.

Action is suited to release an album “Well Done”, which was entirely produced by New York’s Statik Selektah, and includes special guest emcees. Don’t miss the rapping powerhouse on his Australian debut tour, where he’ll be spitting his catalogue of beefy verbal treats, with Tommy Mass bringing the tasty noise on the 1’s and 2’s!
Action Bronson Website  ||   Dr Lector (iTunes)

Brad Strut (AU)
A prolific wordsmith and integral member of Melbourne crew Lyrical Commission, Brad Strut has been fine tuning his craft and contributing to the growth and evolution of Australian Hip Hop since the early ‘90s and has created for himself, a rock solid position in the local Hip Hop scene. With numerous releases since 2001 and a who’s who of collaborations, this groundbreaking artist featured on Jurrasic 5’s DJ Numark’s mix CD, “Hand’s On”.
In 2001 Brad released his debut long player The Authentic LP, an album which, along with Bias Bs Beezwax and Culture Of Kings 1, marked a turning point in Australian hip hop.  With its unforgettable cover of a vicious looking kangaroo caricature wielding a microphone, The Authentic attained phenomenal sales, moving 8000+ units with no industry hype in a time of minimal support for credible Australian hip hop. The album was heralded as groundbreaking, receiving acclaim from hip hop fans the globe over and the track A Good Thing even appeared on Jurassic 5 DJ Numarks mix CD Hands On (Sequence Records 2004). The AuthenticLP featured names such as Lazy Grey, Sean B and a freshly formed Melbourne crew Lyrical Commission, who had recently featured on,Culture of Kings Volume 1 with their track Lyrical Mongrels.