Since the release of his debut album Ready in August, Ellesquire has been creating quite a buzz. Receiving positive reviews and feedback from street press, radio, magazines & blogs nation wide. The album was FBi Radio ‘Sunsets Album Of The Week’ and it’s single On The Prowl was added to full rotation on Triple J. 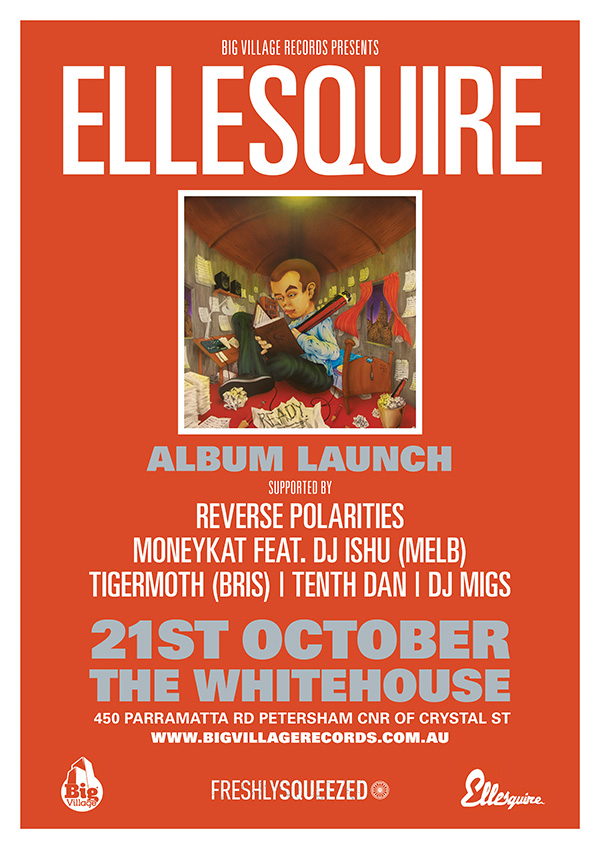 On The Prowl has been the most requested song twice on Triple J’s Super Request, Reached number 9 on the iTunes Hip Hop/ Rap charts and has clocked over 30 000 views on youtube within a month of it’s release.
Stemming from the albums success, Ellesquire has been hand picked to play at upcoming festivals such as Changing Lanes, Peats Ridge and Sub Sonic As well as scoring support slots for Biz Markie, The Herd, Mantra & Thundamentals. Now is your chance to see Ellesquire officially launch his album Ready at the new improved Sydney venue The White House. Presented by Big Village in conjunction with Freshly Squeezed, this show is not to be missed. With special guests; Reverse Polarities (Big Village), Money Kat feat. Ishu (Melb), Tigermoth (Bris) Tenth Dan, DJ Migs, & DJ Sam Z.

$15 entry. – Tickets available on the door (providing show hasn’t sold out) + later this week through moshtix.
Venue has limited capacity so we suggest getting your tickets early!