In Good Company three distinctly unique individuals fusing their respective styles together to produce a hybrid self-titled LP. Consisting of Syntax, Breach and Whisper, the dynamic trio are seasoned word-slingers with a partiality for wordplay, stunning punch lines and sonic storytelling. 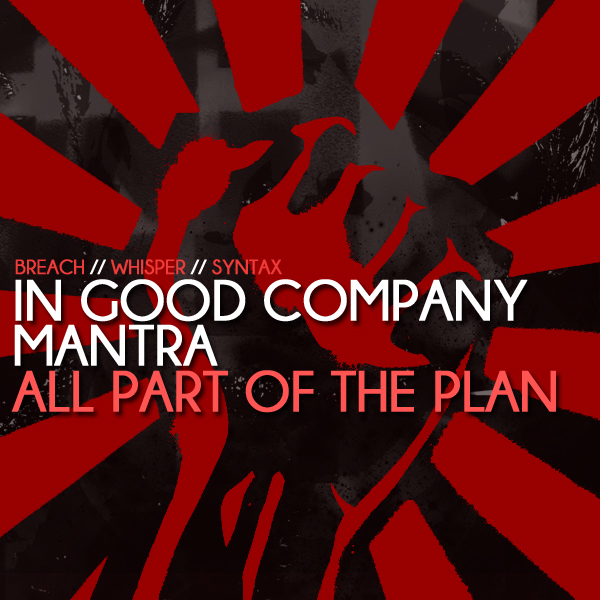 Featuring an assortment of impressive vocal contributors including Eloquor, Mantra, Ginger Van Es, Boltz and Skyzoo (USA) and additional production highlights from heavyweights M-Phazes, Jase, J Smith & Dutch, and Joe Lewis, IGC’s dynamic fusion of mindsets and themes of exploration have surfaced with brilliance and retrospect. The first single The Road, produced by Whisper, is an electronic bounce filled anthem featuring Melbourne songstress Ginger Van Es. Accompanying the single is the fresh new clip which can be viewed here.

The album is an excellent example of complimentary skill, each member bringing his own set of teeth to the brawl. Whisper’s supreme production skills claiming the bulk of the album, his lyrical poignancy is resonant throughout. Syntax with his venomous wit and fondness for sci-fi references, concocts imagery of other-worldly possibility while Breach tells it how it is, his voice rich with stoic assurance and intelligence. Available in stores now, the IGC boys will be performing at their Official Dual Album Launch with label mate Eloquor in Melbourne on Saturday the 17th of December at Revolver Upstairs – Find out more here.

All Part of the Plan feat. Mantra produced by Whisper, takes a cynical look at big business and political agenda.