Following the release of the title track from his soon to be released sophomore album, Infinity, Sydney hip-hop artist Chance Waters (formerly Phatchance) announces that he will hit the road for a series of East Coast shows this April and May. Infinity is produced by Adelaide artist-to-watch One Above, who recently produced The Hilltop Hoods’ #1 Single ‘I Love It ft. Sia’ as well as numerous songs from Chance’s debut LP, Inkstains. 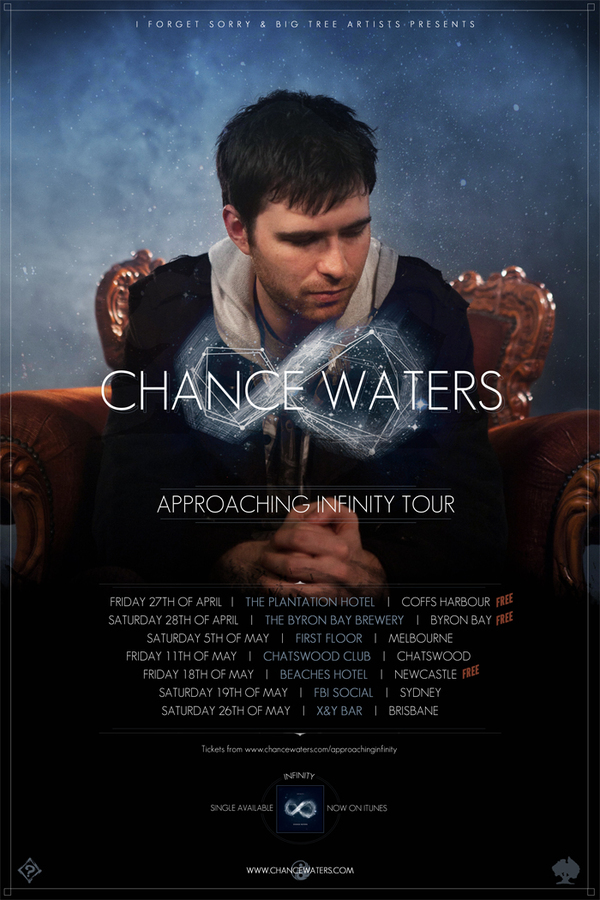 After more than five years actively touring the country and releasing music under the moniker Phatchance, Chance Waters has decided to lose the alias and return to his given name. With the changing of the guard now complete, Chance has his head down and his mind firmly focused on the road ahead.

Chance has toured the country extensively, playing his own headline shows as well as support slots for international heavy weights such as Method Man & Redman, DJ Premier, The Beatnuts and De La Soul, and a score of local mainstays including Bliss N Eso, The Herd, Urthboy, Muph N Plutonic, Drapht, Pez & 360, and The Funkoars. In 2010 Chance embarked on two separate national headline tours, totalling over thirty dates to more than 7000 punters, and won a spot to showcase his material at APRA’s ‘Song Summit Live’. Last year, Chance hit the road for the Hey, Where’s Your DJ acoustic tour, the first ever acoustic Australian hip-hop tour, which included capacity shows in Brisbane and Melbourne, as well as a three-week capacity residency at Oxford Art Factory in Sydney.

More recently, Chance released the mixtape Approaching Infinity, featuring the remix of Gotye’s ‘Somebody That I Used To Know’. The track is currently receiving play on radio in Europe and has clocked over 100,000 views on Youtube.