Off the back of his new smash single Heard It All, snowballing emcee Illy has announced a huge national tour throughout August and September. As well as major cities, the tour hits towns as far and wide as Toowoomba, Dubbo and Falls Creek, and will be the first chance for fans to hear material from Illy’s soon-to-bereleased third album Bring It Back, live and in the flesh. In support will be Chasm Soundsystem feat. Scryptcha. 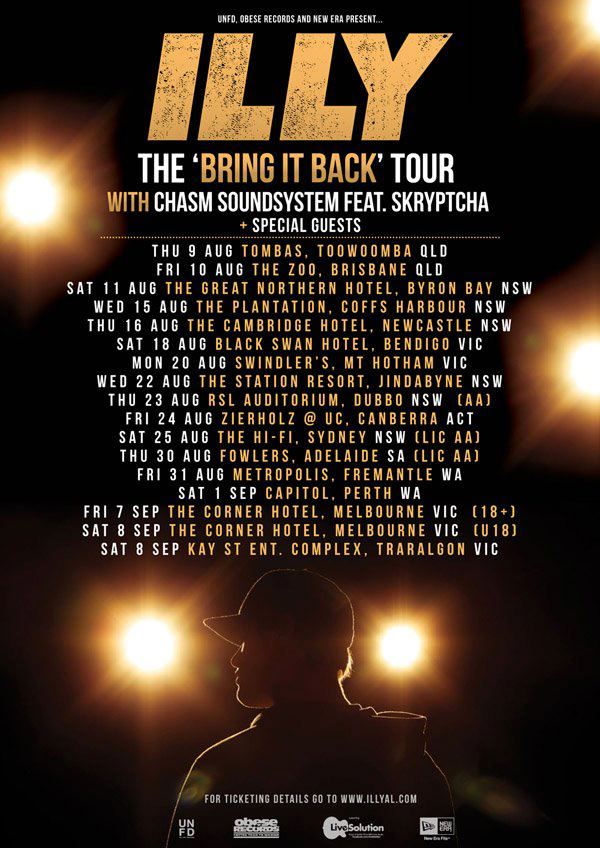 Illy’s sophomore album The Chase spawned the powerful and well-loved singles Cigarettes (triple j Hottest 100 #25), The Chase and the Gold-selling It Can Wait feat. Owl Eyes (triple j Hottest 100 #29). It took him on two sold out headline tours, an endless list of festival bills and scored both ARIA and AIR Award nominations. Illy has thrown more fuel on the fire with Heard It All. And with a new album on the way, this is just a taste of what’s to come. Bring It Back is a positive departure from 2010’s The Chase and takes Illy back to his fundamental hip-hop roots. The album features creative collaborations with his local hip-hop peers including M-Phazes, Pez, Trials (Funkoars), Mantra and Reason.

Illy said, “Bring It Back is a record I’ve had in mind for some time. Usually I work with a very small team so being able to branch out and work with lots of new people has resulted in a really different sound. There are a bunch of songs on Bring It Back that I can’t wait to do live, so getting back out on the road can’t come quick enough!”

In support is Chasm Soundsystem, one of the leading hip-hop producers in Australia who has worked with local heavyweights such as The Herd, Resin Dogs, Dialectrix, Thundamentals, Urthboy and Skryptcha. Chasm’s new album This Is How We Never Die is out now through Obese. Tickets on sale 9am, Tuesday 19 June. See below for dates and venues. Heard It All is available now on iTunes. Look out for Illy’s new album Bring It Back later this year through Obese Records.