If you don’t know New Zealand’s Home Brew, ask NZ Prime Minister John Key. Or The University of Auckland. Or watch the EPK. Despite what these people might tell you about Home Brew being burdens on society, or advocates for drug dependency, you’ve got to respect the integrity of their independence and the diligence of their work ethic. 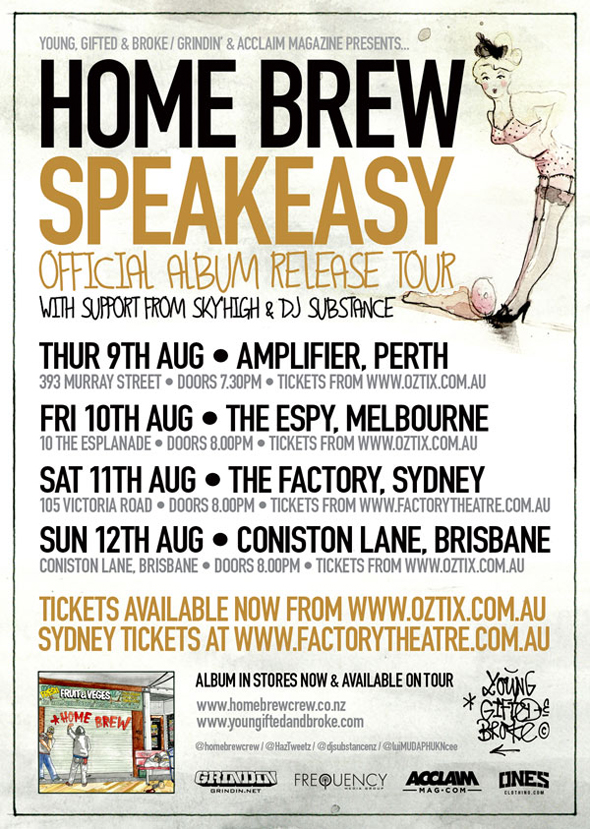 Off the back of launching their self-titled double album (the first Hip Hop album to debut at #1 in New Zealand since 2003) by throwing a 48-hour party in an old brothel, having their controversial pop-up store closed down early, then touring the carnage around NZ, Home Brew are bringing the party to Australia.

Home Brew will be showcasing tracks from their critically acclaimed double album – a piece of work that after three years of dedication and benefit fraud, is good enough to move them out of their Mum’s place. Conceptualized by the balance of life’s extremities, one side is light, the other, dark. It’s a dichotomy of methadone and melancholy. Infinity and finality. It’s a record that looks back at Saturday’s moment of madness through Sunday’s moment of clarity, and something you definitely won’t want to miss live.