Ushering in a new era of lyrical excellence, Kendrick Lamar is the genius MC who, on the eve of releasing his major label debut, announces his first Australian tour presented by Niche Productions. 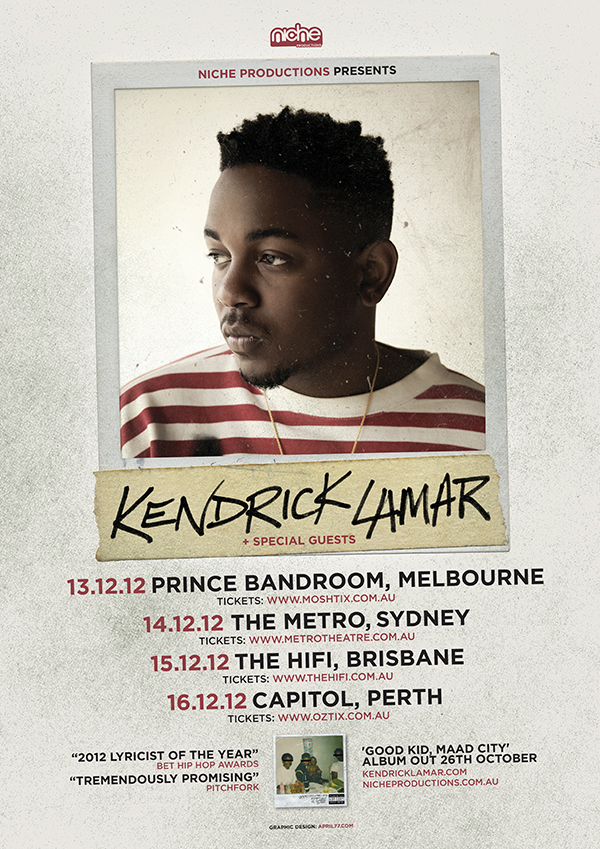 The following year he released his first independent album Section 80 to critical acclaim. Released exclusively through iTunes, it was instantly ranked as one of the top digital hip hop releases of the year.

Across his career Lamar has amassed a large following and has already worked with Dr. Dre, Game, Drake, Rick Ross, Talib Kweli, Busta Rhymes, E-40, Warren G, Bun B, Tech N9ne, Lil Wayne and Lady Gaga among many other artists. His major label debut studio album good kid, m.A.A.d city, is set to be released in Australia on October 26, 2012.

“Kendrick is one of, if not, the best rapper out right now. I haven’t felt this excited about a hip-hop release since Wu Tang released their debut album in 1993. Either get to know Kendrick now, or get left behind” – M Phazes

The album has spawned the crossover hits The Recipe and Swimming Pools (Drank), which have further propelled his status as a supreme MC who crosses over topreviously disparate fan bases. Before the release of good Kid… Lamar also dropped the Just Blaze produced Compton and the Hit Boy produced Backseat Freestyle, showing even more diversity to his output.

Niche Productions is thrilled to announce the debut Australian tour of this phenomenal artist Kendrick Lamar. Do not sleep on these shows!