Hugh Winterflood, aka SkankMC, grew up and lives in Alice Springs, a place that often makes the news for the wrong reasons. It’s a complicated and confronting town, but bordered by the majestic MacDonnell Ranges and with the ancient ghost gum-lined dry Todd River snaking through its centre, it’s also devastatingly beautiful. 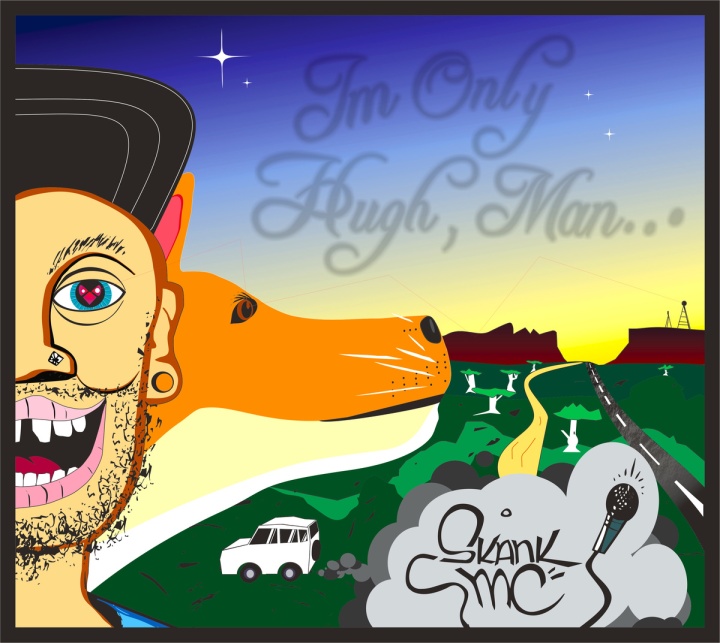 To the rest of the country Alice Springs is ‘The Alice’, but you’d never hear a local call it that. Alice is Alice, and as SkankMC raps in his track Skank N Flim Flam, “it’s the centre of creation”. Alice has influenced his style immensely, so much so that he’s not just a proponent of Hip Hop, but first and foremost Northern Territory Hip Hop.

As a kid Hugh’s stereo was stuck on Eminem, Bliss N Eso and Paul Kelly. His family are huge Kelly fans, and his storytelling through song was what Hugh loved most. When he first heard Hip Hop he heard similar stories and soon realised it was the best medium to express ideas from an isolated place like Alice. He turned school book scratchings into lyric writing when he was 16, and went from spitting along to local hip hop on the stereo to reciting his own rhymes soon after. When he was 18 he joined local funk/roots/reggae outfit Dr Strangeways who pride themselves on their Central Australian spirit. With them he brought raucous Alice energy to Woodford, Wide Open Space and the Alice Desert Festival.

After a couple of years Hugh felt it time to focus on his solo work. A massive confidence boost occurred when he won his debut battle at Adelaide’s Got Beef? in Feb 2012. The four judges unanimously declared him the winner, with one of them saying, the battle speaks for itself. SkankMC is a crazy motherfucker. Watch out for him.’ Hugh then released his first single Georgia, a soulful groove sampling Ray Charles’ classic which received airplay on triple j Unearthed and The Hip Hop Show, and four stars from triple j’s Dom Alessio and Nicole Cheek.

In August 2012 Hugh and his DJ Flim Flam (drummer of Miazma, one of the major players in Alice’s burgeoning metal scene) made the 3,000k round trip up to Darwin and back to play the iNTune Music Conference. Of the 15 Territory acts he was selected to represent the NT at the 2013 Perth Big Day Out. This magic opportunity got Hugh cracking. He promptly pulled together his debut EP I’m Only Hugh, Man… and released it two days before his BDO slot at a sold out launch in Alice. It was the start of his first tour which included BDO, a second show in Perth and finished on a high in Adelaide supporting Koolta alongside Purpose and his favourite local emcee Prime.

Hugh works as a youth carer with his wife Kelly. They look after children who have been taken into government custody due to familial violence and alcohol and drug abuse. While the John Butlers and Xavier Rudds of the Australian music scene rely on catchy choruses to deal with difficult issues, Hugh experiences daily the trauma some children are put through by their own family and the system alike. Northern TerrorStory is a haunting, harrowing narrative about a young Aboriginal boy taken into care. It’s one you will not hear anywhere else, and one which many Australians have no idea about. It’s got no big sing-alongs or catchy hooks, but what it does have is genuine perspective and pathos. Hugh knows Hip Hop is one of the best ways to communicate these stories to our mostly oblivious nation.

Despite his remote location Hugh is determined for people to hear his music. He wants to represent the Northern Territory by giving its youth a loud and proud voice on the national stage; a voice that cuts through the negativity on the news with real insight and understanding. Waging war with the tyrannies of distance, Hugh is going to keep making a go of it in Alice. He knows how crucial it is to keep the NT Hip Hop scene alive and inspire and help younger kids. Besides, driving long distances is part of growing up an Alice kid. As he spits in Skank N Flim Flam, inspired by that 3,000k road trip: ‘it’s a bloody mission but we get the applause!’

The above clip is a teaser to the upcoming NT Hip Hop documentary, showcasing Alice Springs rappers and the local scene, it is due for release early October 2013.