Blues Mountains via Newtown hip hop trio Thundamentals continue to flip the concepts of what hip hop is supposed to be with new single Smiles Don’t Lie from their upcoming, as-yet-untitled, third album, proudly announcing their first and only headline tour for 2013 – taking in Sprung Festival and FBi’s 10th Birthday celebrations – to bring the new music to fans.

Already added to rotation on triple j, debuting at #5 on the iTunes Hip Hop Charts, and an unashamed love letter, Smiles Don’t Lie would not have been an obvious single choice for the boys – MCs Tuka and Jeswon and DJ Morgs – a year ago.

Though Jeswon had remarked earlier last year that Thundamentals material is, “pretty eclectic, and very musical; a reflection of our willingness to experiment with different genres,” the huge response to a more sensitive Thundas on their triple j Like A Version of Matt Corby’s Brother reminded them that the template of hip hop isn’t set in stone for them: as long as the music and meaning is there, a connection can be made. As Tuka points out, “I felt that it would be good to honour our new found sound and following before unveiling the rest of what is by far our most experimental record to date.”

Says Jeswon, “For me, ‘Smiles Don’t Lie’ is a nostalgic, heartfelt song which celebrates many of the things I appreciate about the fairer sex, and my girlfriend in particular. I feel like the song really captures that daydream-like quality of yearning for a loved one when you aren’t in their presence. My motivation for writing this song is that it is a great opportunity to express my respect, admiration and love for my partner who has always been so supportive of my music. I can imagine her driving to work and hearing this song come on the radio and seeing a big smile break out across her face, knowing that she is the inspiration behind my lyrics. To be able to elicit an honest reaction of joy in the person I love the most as a result of something I have made would be an amazing feeling. I just want to make her, and hopefully the rest of Australia, feel good as a result of this song.” 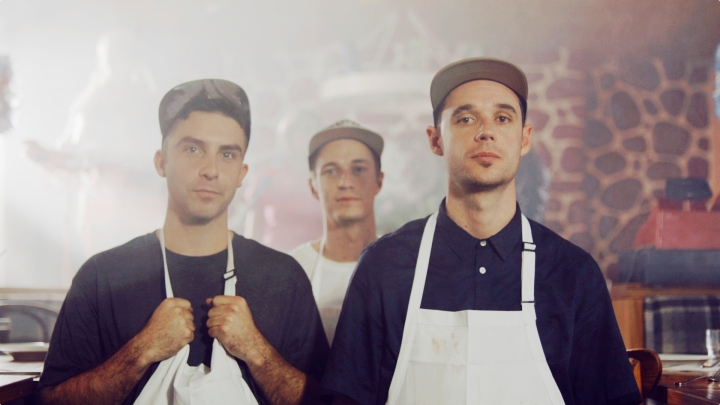 It was following the response from their sophomore record Forevolution and, in particular, the enormously popular recording they made of Brother that the band realised that their music was speaking to people outside the tried and successful Thunda’s paths.

Smiles Don’t Lie follows on from what has been a wildly successful few years for the Newtown trio. Moving backwards through the past twelve months, Thundamentals could commit to only one serious tour the aptly-titled Get Busy tour between the scheduled writing and recording breaks set aside for the upcoming album.

Tuka had also been racing round in the wake of his second LP Feedback Loop, which saw him taking on a serious amount of solo shows, as well as support slots for everyone from Seth Sentry to Kendrick Lamar. Similarly, DJ Morgs and Ev Jones have embarked on a side project called Jones Jnr. whose soul drenched neo-gospel beats have attracted the attention of international websites and seen them just announced to tour with – firstly – NZ Legends Fat Freddy’s Drop, followed by shows with soul troubadour Cody ChestnuTT. This adds to a resume that boast shows with everyone from soul royalty Bettye Lavette to Blue Note singer Jose James, neo-soul hero Bilal and underground trendsetters Oddissee & Olivier Daysoul.

2011 saw the release of Thundamentals’ second album Foreverlution which saw their first inclusion in both the ARIA and AIR Charts [debuting at #19 on ARIA Australian Charts, #17 on ARIA Urban Charts and #3 on the AIR Charts], not to mention the first two singles sliding into rotation on triple j.

Sleeping On Your Style [2009] had previously produced singles that leapt onto high rotation on the J’s with the release proper garnishing the band spots on 2010’s Rolling Stone Magazine’s ‘Acts To Watch’ list and Sydney Morning Heralds ‘Next Big Things’ list and fourth single T.H.U.N.D.A achieving MTV Rotation.

With a touring history includes A Tribe Called Quest, Big Boi (Outkast), MF Doom, Lyrics Born, Drapht, Bone Thugs N Harmony Thundamentals have grown into one of Australia’s most accomplished and energetic live acts, raising roofs and causing hangovers wherever they go, but as well invoking thoughtfulness and delivering new sounds to a genre scene that is seriously, and finally, beginning to spread its wings in this country. The last tour sold out fast…you know what to do.