Dainty Group today announced a trailblazing collaboration with hip-hop icon Eminem to do headline shows with the world’s biggest rap and urban stars across Australian stadiums in 2014. Get ready for Rapture, a game-changing hip-hop event curated by Eminem, and presented by Dainty Entertainment, with ears tuned to the streets, and eyes locked on rap’s future. 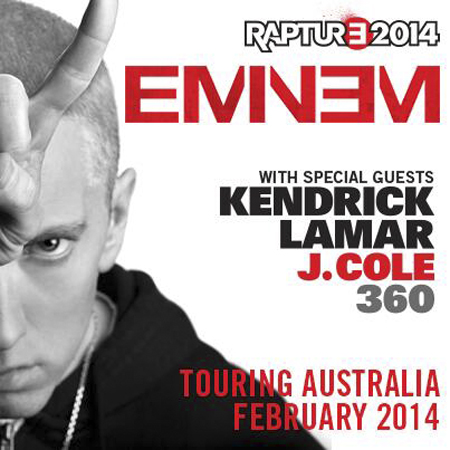 Eminem has handpicked the now, and the next, for the debut dose of Rapture. Rapture Australia & New Zealand 2014 stars: Eminem – In a headline spot, hot off the release of The Marshall Mathers LP 2 due on November 5, and billed as one of the most anticipated albums of the year. The Guardian said of his recent shows in Britain: “His stage presence is as potent as ever.” Eminem sold out every seat of his triumphant stadium tour in Australia two years ago.

Kendrick Lamar – A blinding ray of rap genius from the sunshine state, California, with his ground breaking album, good kid, m.A.A.d city, hits Swimming Pools and Poetic Justice, and crowned the new king of the West Coast by Snoop Dogg and Dr Dre.

J. Cole – Chart-topping rapper who got the tick of approval from Jay-Z with his clever rhymes and intriguing lyrical content, then followed through to deliver street savvy work including two No.1 albums, Cole World: The Sideline Story, and his latest Born Sinner.

*360 – Hometown hero and ARIA Award winner 360 broke through with a platinum-selling album Falling And Flying, and hit singles including Boys Like You, telling true tales from familiar streets without pretending or posturing. (playing Melbourne, Brisbane & Sydney only)

*David Dallas – The forefront of New Zealand hip-hop, David Dallas has just released his new album Falling Into Place. The album is a continuation of form from Dallas, following on from the acclaimed The Rose Tint and Buffalo Man. It features the hard hitting, anthemic single ‘Runnin’, which is tearing up the singles charts. (playing New Zealand only)

“I am really excited to be working with Eminem on Rapture, an annual event with a long term vision of showcasing the best of the best in hip hop at affordable prices to the punter,” promoter Paul Dainty said.

Lose yourself, Australia & New Zealand, and get caught up in the Rapture in 2014. Tickets on Sale Thursday 31 October. It has been rumoured that Chance the Rapper and also Action Bronson maybe named to appear at Rapture 2014, we will bring you those details as they unfold.