It’s no secret that something in the Blue Mountains water has meant that over the last ten years, its musical alumni has produced more influential hip hop / electronic artists than any other region outside of Australian capital cities. The devastating fires that swept through the Blue Mnts area have brought together some of its most celebrated artists for a massive ONE OFF SHOW to raise money for their friends, family and the Blue Mnts community at large. 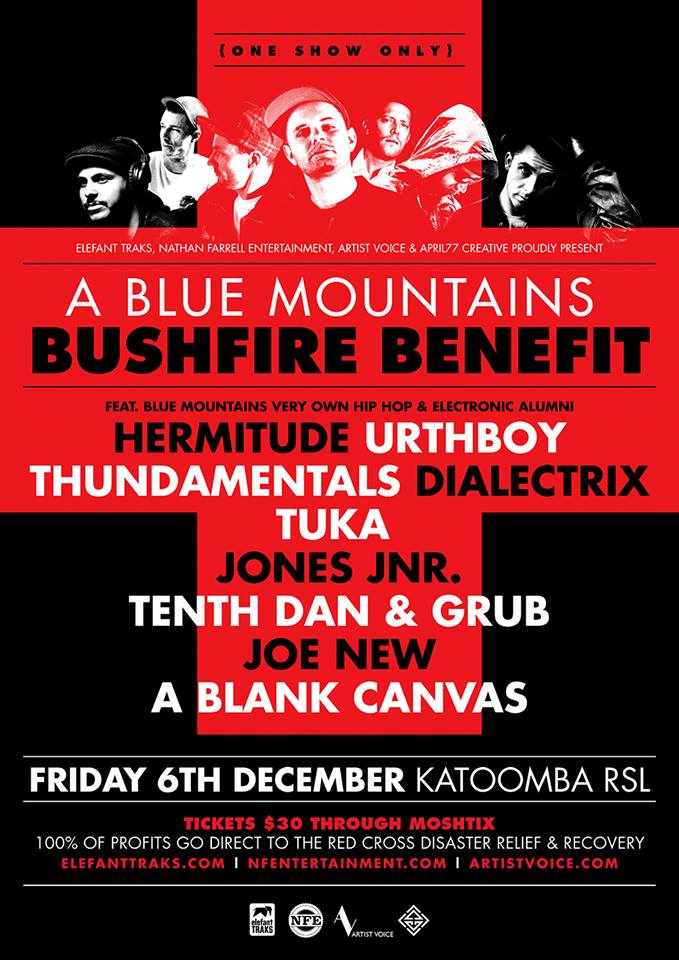 As well as being a fundraiser for those affected by the bushfires, the show is also meant, quite simply, as a positive event for a community that has been extremely affected over the past 4 weeks. Though all acts are Blue Mnts natives, the benefit gig boasts a combined line up potentially never before seen in Katoomba – bringing Blue Mnts favorite sons together in an unprecedented celebration of their solidarity for their home town and the community that raised them.

The Artists
Hermitude are an award-winning electronic production duo, over the past 12 months their already massive profile has exploded off the back of their Australian Music Prize-winning album HyperParadise. They’ve won an AIR Award, been nominated for two ARIA’s and a J award and played everywhere from Parklife to Homebake, Woodford and Rhythm & Alps (NZ).

An entity unto himself on the Australian hip hop scene, Urthboy is an award-winning hip hop artist and three time nominee of the prestigious Australian Music Prize (AMP). Alongside his illustrious solo career that has seen him win Best Urban/Hip Hop album at the AIR Awards and receive an ARIA nomination, he manages the Elefant Traks label and fronts Australian hip hop institution The Herd.

Thundamentals – with their triple J Like A Version cover of Matt Corby‘s ‘Brother’ gaining almost a million views on youtube alone, upon its release in September Thundamental’s clip for their current single ‘Smiles Don’t Lie’ was both Channel V and Rage TV’s ‘Clip Of The Week and was also nominated for a J Award (‘Best Music Video’). The trio just wrapped up their only national headline dates for the year with sellout shows in every state.

Dialectrix is regarded as one of the most prolific MCs and hip hop performers in the country. Breaking out in 2004 as a vital member of Down Under Beats, Dialectrix has contributed to M-Phazes ARIA award winning release Good Gracious and released and performed with hip hop super group Gully Platoon (with Pegz, Joe New, DJ 2Buck). All of which has been alongside releasing and touring three acclaimed solo albums and one EP of his own, the last of which, The Cold Light Of Day, was released in April of this year.

Tuka – One third of Thundamentals, it was his second solo album “Feedback Loop” that really announced Tuka as a solo act of extreme repute with two huge singles ‘Die A Happy Man’ and ‘Just To Feel Wanted’ from the album picked up by triple J. It was an album cycle that saw him go on to further cement his reputation live, picking up national tour support slots with everyone from Kendrick Lamar to Seth Sentry.

Jones Jnr. – Born out of Thundamentals Like A Version from last year Ev Jones and DJ Morgs are now collectively known as JONES Jnr. With two critically acclaimed mixtapes “The Soultapes” out and national tours with the likes of Fat Freddy’s Drop, JIll Scott, Cody Chesnutt & many more, these guys are one to watch over the next 12 months.