Three weeks out from their hotly anticipated tour kicking off, Public Enemy announce some of the biggest names in Australian hip-hop as their supports, including Melbourne’s Mantra, Canberra’s Citizen Kay, and Brisbane’s Impossible Odds, with Adelaide’s DJ Sanchez and Melbourne’s DJ MzRizk filling out the DJ sets. 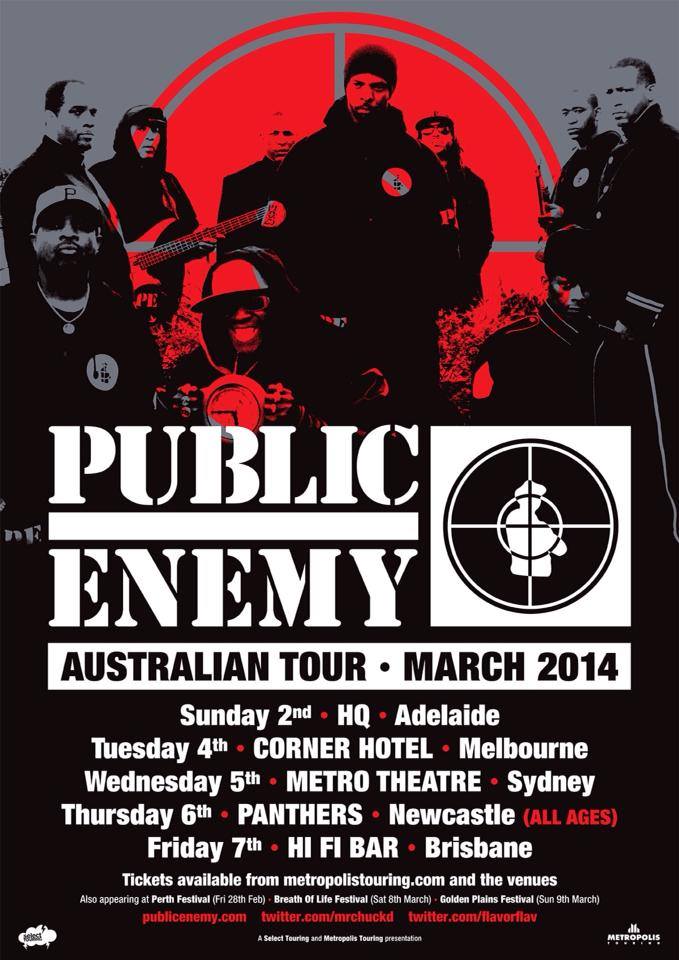 After a busy 2013 cementing his new chapter with Ten To Two Records by dropping the infectiously autobiographical single Loudmouth, Mantra is set to bring his rapid-fire lyricism and fearsome reputation to Public Enemy’s stage. One of Australia’s most loved MCs, Mantra has been making Australia’s hip-hop scene sit up and take notice since 2010, with the release of his much-requested on the airwaves debut album Power of the Spoken, which earned Mantra the coveted title of triple j Feature Album as well as a legion of dedicated followers. His 2011 follow-up Speaking Volumesbrought a new, deeply personal dimension to Mantra’s music, and deepened his legacy, bringing about a series of collaborations with some of Australia’s biggest hip-hop titans, including Drapht, Urthboy, Illy and M-Phazes. With a legacy like this, sharing the stage with Public Enemy is just the next chapter in Mantra’s already formidable career.

Ghana-born Canberra-raised rapper Citizen Kay has been causing a stir since early 2013, with the release of his debut collaboration Ansah Brothers featuring his brother Genesis Owusu. Follow up singles YES! and Raise a Glass featuring BKBB slayed airwaves and audiences alike,  earning massive love from triple j in the form of spins and rotation. Known for his slick and savvy rhymes and irresistible genre-bending beats, CK has already earned his stripes in support slots for the likes of Wiz Khalifa and Earl Sweatshirt in his young career – this Canberra young gun is set to put on one hell of a show in support of Public Enemy.

With Brisbane’s Impossible Odds contributing their socially aware but no less sick rhymes and beats to the mix, and DJ Sanchez and DJ MzRisk spinning the finest of tunes, Public Enemy’s tour is set to be explosive. Labelled as “the greatest hip hop act of all time,” by the BBC and “utterly essential,” (Louder Than War) there is no doubt when Flavor Flav and Chuck D begin to start their iconic raps, there is nothing one can do but simply admire the creative genius that is Public Enemy.

With only three weeks to go, if there is only one gig you attend this year, make sure it’s Public Enemy.