Total Eclipse (X-Ecutioners / ITF World Champ) returns to Brisbane with Deejaye Katch, Calski, Tailor Made, Kryptamistik & Quorum Consensus. Back in the day he was on the turntables for such groups as underground Hip-Hop legends Organized Konfusion (Prince Poetry and Pharaoh Monch) and even worked with fellow Brooklyn native Jay-Z during the birth of Rocafella Records. 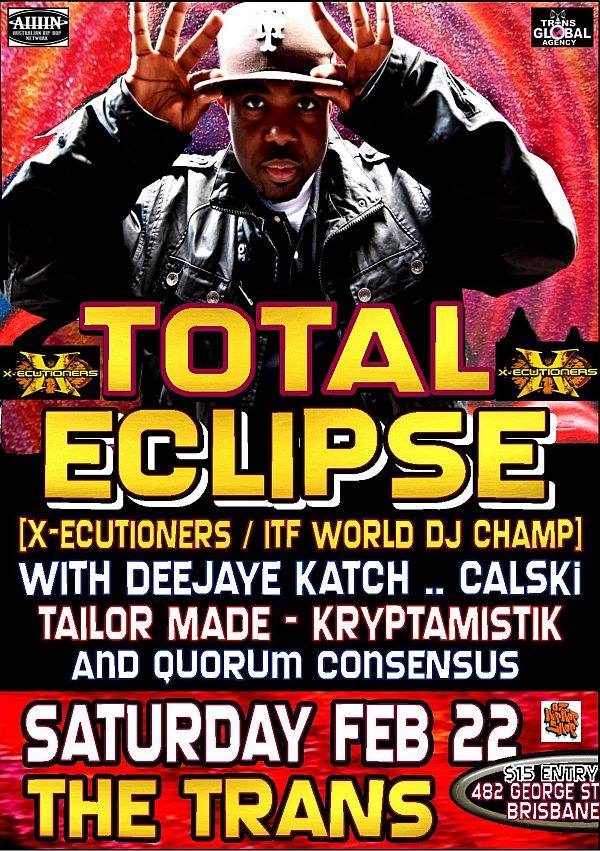 In November of ’94, Total Eclipse entered his first DJ battle live on the air on DJ Mayhem’s New York college radio show (WNYU), taking first place. His victory caught the attention of X-Men (the original name of the X-Ecutioners crew before obvious legal concerns) member Rob Swift. Rob started to spar and practice new routines with Total Eclipse on the turntables, Through Rob, he met the other members of the X-Men, including Roc Raida and Mista Sinista, and started practicing with them regularly. In 1996 Total Eclipse entered legendary record shop Beat Street Records’ DJ Battle, and took home the first place bronzed Technics 1200 turntable prize. Dominating the DJ battle scene that year, he went up against the best in the world, going after one of the most prestigious titles in the DJ world, the International Turntablist Federation (ITF) world championship battle which he won.

The X-Ecutioners then asked him to join the crew officially, they recorded X-Pressions in 1997, Followed by the critically acclaimed Built From Scratch then they went & toured 4 continents as well as the Caribbean. They rocked stages with Eminem across his famed Anger Management Tour and Linkin Park’s Project Revolution Tour. He’s worked with everyone from Faith No More’s Mike Patton to Biohazard, Rob Zombie, Miri Ben-Ari, Biz Markie, Everlast, Ghostface Killah (Wu-Tang), Jay Z, Cypress Hill & Dead Prez to name a few.

Today, Total Eclipse continues to be one of the scene’s most sought after DJs. Whether it’s rocking a hot party for corporates like Maxim, Nike, MTV or manning the turntables and developing mind-blowing performances at annual events like The Rocksteady Anniversary or Zulu Nation Anniversary in NYC for true Hip Hop heads. He continues to take his craft to the next level everyday by developing amazing club sets and showcase routines. Don’t sit & home & be a whiny bitch (“nothing ever happens in Brisbane”) Tickets are only $15.