There is one name in Australian music that has changed the game. One artist who can get the room jumping with the drop of a beat. The country’s hottest and most controversial crossover star, 360 is heading out on his biggest ever tour across the country this September. 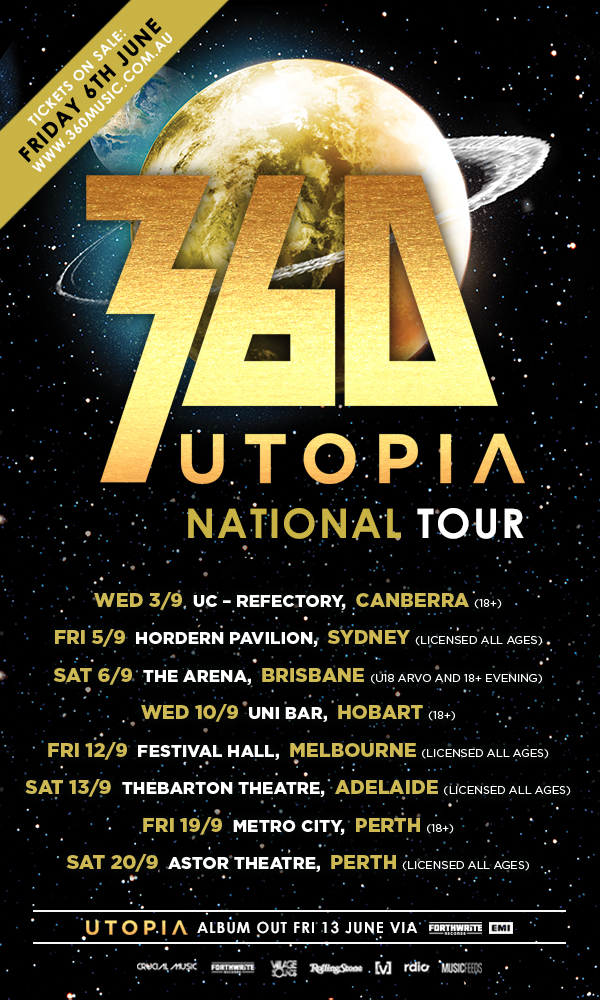 This is 360’s first headline tour in over two years and since the release of Falling And Flying, the double platinum album that resulted in Sixty’s meteoric rise to fame.

A lot has changed since Falling And Flying delivered six certified smash-hit singles (Boys Like You – 4 x Platinum, Child – Platinum, Run Alone – Platinum, Killer – Gold, Just Got Started – Gold, Throw it Away – Gold). Lead single Boys Like You was voted #8 in triple j’s 2012 Hottest 100 and peaked at #3 in the ARIA singles charts while 360 was up for ten ARIA nominations of which he was awarded Breakthrough Artist and Producer of the Year.

Fast forward to 2014 and 360 has continued to evolve and stay at the forefront of his game. With his third album Utopia set to drop on Friday 13th June, Sixty has created a unique world of hip-hop, with elements of pop, rock and dance; a brilliant and ambitious display of influences that come together seamlessly to pave a musical journey through his deepest, darkest imagination in the form of Utopia.

Exclusive ‘Live It Up’, ‘Price Of Fame’ & ‘Utopia’ Packages
For fans that wish to increase their 360 live experience there are three very limited packages to choose from that offer the chance to attend sound check and gain early access to shows, meet and get a Selfie with Sixty, receive a limited pair of custom 360 ‘Utopia’ x SOL REPUBLIC headphones and even stand side of stage while Sixty performs! For more info on ‘Live It Up’, ‘Price Of Fame’ and ‘Utopia’ packages visit 360music.com.au