From sky diving into his Splendour In The Grass show last weekend to crisscrossing the country this next few months on a huge regional tour, local hip hop artist Illy shows no sign of slowing down with the announcement of his national One For The Cities tour, which will see him play the biggest headline shows of his career yet hitting capital cities across Australia through November and December. 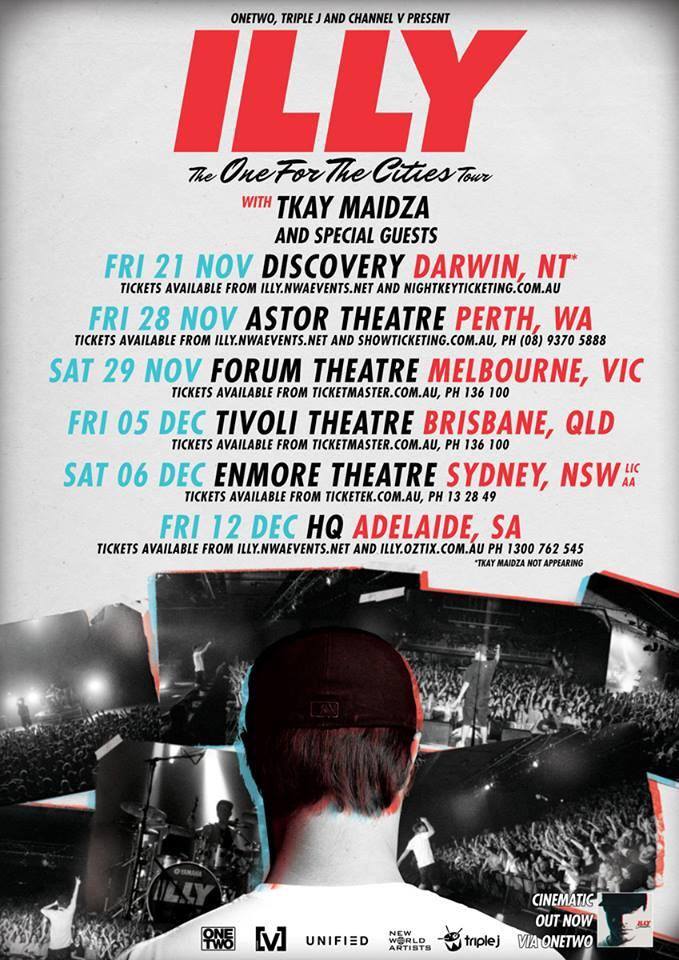 The One For The Cities tour will round out an epic twelve months for Illy, which saw him take out the Best Urban Artist at the 2013 ARIAs for his previous album Bring It Back, his fourth studio album Cinematic debut at #4 on the ARIA album chart, Cinematic single Tightrope achieve Platinum sales and two songs in the triple j hottest 100. Also this year, Illy performed at Groovin’ The Moo and closed out triple j’s massive annual One Night Stand (playing to a cool 17,000 people), he then toured Europe with Hilltop Hoods and most recently took the stage at Splendour In The Grass.

Recorded with Executive Producer M-Phazes (Eminem, Kimbra, Bliss n Eso), Cinematic is a genre-skipping record that pushes outside of the usual musical boundaries while also delivering Illy’s trademark biting lyricism. A tale of a smart and idealistic hip-hop storyteller, the album includes hit single Tightrope and infectious new single One For The City featuring Thomas Jules (Rudimental) on guest vocals.

Catch Illy touring his album Cinematic in capital cities throughout November/December on the dates below. Exclusive Fan Pre-Sale available 9am, Tuesday 12 August. General Tickets on sale 9am, Thursday 14 August.