Only East Coast Side Show Appearance

Soulfest in association with International Events Group (I|E|G) are pleased to announce an exclusive Yasiin Bey aka Mos Def headline show on Monday 20th of October at The Enmore Theatre. 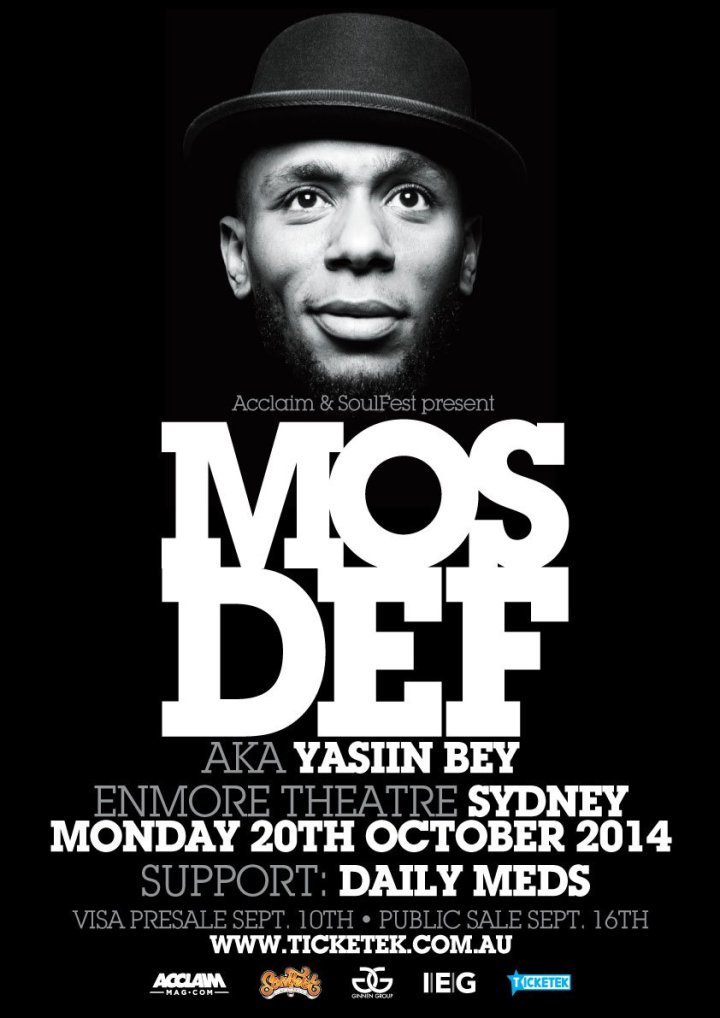 He is one of Hip-Hop’s most iconic recording artists with a career that spans over twenty years. Yasiin Bey aka Mos Def hails from Brooklyn New York and was a major force in the early nineties underground hip-hop movement appearing on the albums of fellow rapper’s De La Soul and Talib Kweli.

Forming his group Black Star on Rawkus Records in 1998 and releasing the successful “Mos Def & Talib Kweli are Black Star”, the album went on to produce the hits “Respiration” and “Definition” which went on to become VH1’s 100 Greatest Songs of Hip-Hop. Launching his stellar solo career with his album “Black on Both Sides” in 1999 secured Mos Def major industry love and respect for his socially and political aware lyrics and poetic style of storytelling through rhyme, which garnered him a mass of mainstream hip-hop fans in the process.

His second album ‘The New Danger’ in 2004 bore the singles “Sex, Love & Money” and “Ghetto Rock” which went on to receive several Grammy Award nominations. As a respected rapper and actor, Mos Def has balanced the fine art of his craft and parlayed them into successful performance’s on Dave Chappelle’s Block Party, plus acting roles in Brown Sugar, Talladega Nights, Be Kind, Rewind and Cadillac Records to name a few, and has gone on to appear in the critically acclaimed HBO Film Something the Lord Made as Vivien Thomas, for which he received an Emmy Award and Golden Globe Nomination, and won an Image Award.

Mos Def is a definitive performing artist and has become one of hip-hop’s most intriguing and historic emcees of our time! Monday 20th October – Sydney, Enmore Theatre Tickets On Sale Now General Admission $69 plus booking fees.