Jurassic 5 formed in the early nineties and quickly became known as one of the soulful and socially aware Hip Hop groups of the LA underground scene. They weren’t throwback or old school, but they embodied a nostalgic sound that was also at once fresh and has remained the benchmark for original Hip Hop ever since. 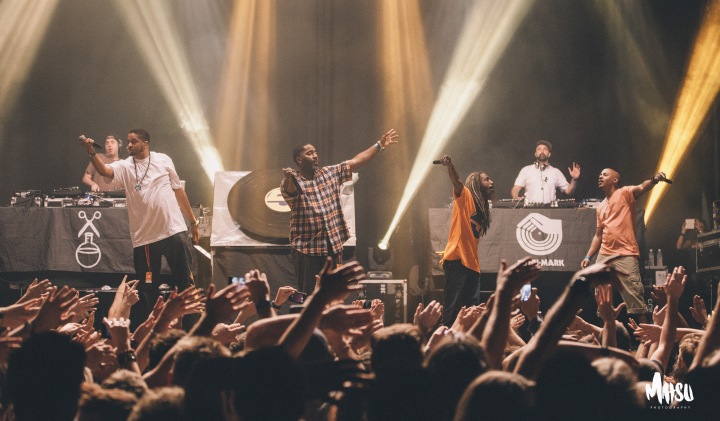 The group gave us timeless tracks such as ‘Quality Control’, ‘What’s Golden’ , ‘Day at The Races’ and ‘Thin Line’ featuring Nelly Furtado before they parted ways in 2007. Although the band was out of sight they were certainly not out of mind and their lore grew on soundtracks, and in video games. After a huge sold out tour in early 2014 this distinctive six-piece are back and showing us what Hip Hop should sound like.

Jurassic 5 have released their first song since the reunion, ‘The Way We Do It’. It features production from the late Heavy D and a sample of the White Stripes Get Behind Me Satan single ‘My Doorbell’.

The full 6-member tribe are currently in Australia for a HUGE national tour and the Byron Bay Bluesfest! Get your tickets today. J5 emcee Marc 7, joins Jim Steps on aahh Radio to discuss the current tour, his new EP When Sounds Attack Vol. 1, working with Australian artists and that J5 are working on new music. All that and a whole heap more this week on aahh Radio Podcast.

You can purchase tickets to the Byron Bay Bluesfest here.