At the heart of Fallout 4 is its character system. Our games are about making the kind of character you want, doing what you want, and having the game allow and reward whatever playstyle you chose. We also want to make those choices meaningful, and at the same time entertaining. To let you plan ahead, try different things, and to compare your choices against others who built different characters.

The Fallout series makes this even better through the use of the seven SPECIAL stats and its Perks. We made it a goal of ours to have the choice of your SPECIALs be as meaningful as possible, and be the guide for how you built your character through the course of the game.

The first choice you make, early in the game, is the starting value from 1 to 10 of your 7 SPECIALs: Strength, Perception, Endurance, Charisma, Intelligence, Agility, and Luck. Each week we’re releasing videos that give you a look at what those skills do in the game (from Vault-Tec, of course). Fallout 4 – S.P.E.C.I.A.L. Video Series.

When selecting your starting SPECIALs, you can assign 28 points. This makes it difficult to initially max out certain SPECIALs, but you can still start with a 10 if you choose to neglect others. Even though you pick your SPECIALS early before the bombs fall, we do let you change them when exiting the Vault into the Wasteland, after you’ve played for a little.

Levelling is experience point (XP) based like Fallout 3, not skill-based like Skyrim. But levelling speed is closer to Skyrim, and not as slow as Fallout 3. This means you’ll be getting more opportunities, especially early on, to level up and select a Perk. Additionally, whereas Fallout 3 had an initial level cap of 20, Fallout 4 has no level cap, and we’ve balanced the game to keep the content and challenge going for higher levels.

When you level up, you select a Perk, from a Perk chart within the game. Here it is: 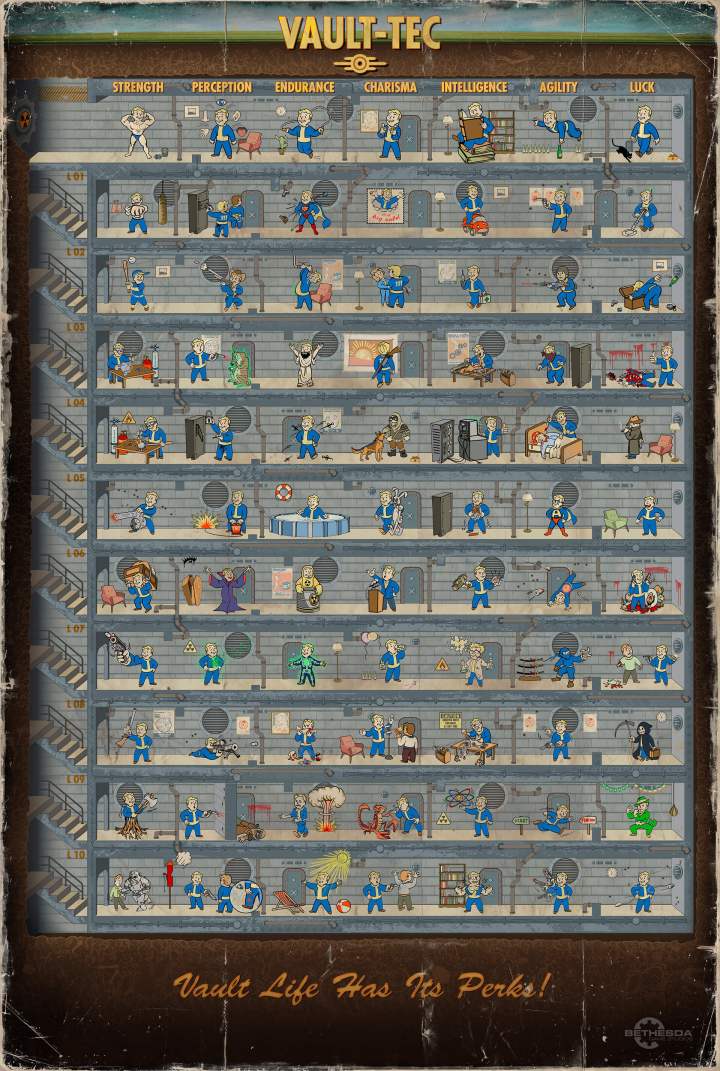 As you can see, each SPECIAL has a Perk assigned for each rank of the SPECIAL, from 1 to 10. You can select any Perk up to the rank of your SPECIAL. If you have a 10 in Charisma, you can select the Intimidation Perk that lets you manipulate human enemies into doing your bidding.

It was our goal that all the Perks be balanced amongst each other, regardless of if they required a 1 or a 10. The higher the SPECIAL requirement, the more focused or exotic the Perk was for that playstyle. Take for example the Agility 1 Perk Gunslinger (20% more damage with pistols), and the Agility 10 Perk Gun Fu (your 2nd target in V.A.T.S. takes 25% more damage regardless of weapon).

What’s important is that each of these Perks is actually a mini Perk tree*, with multiple ranks that also do new things. Gun Fu above allows even more damage the more targets you select, increasing to instant Critical Shots. Gunslinger has ranks that up the range of pistols, add a chance to disarm enemies, and even instant limb crippling shots.

These additional ranks do require your character to be a higher level. This allows us to make some powerful Perk ranks that reward your investment in a certain SPECIAL as well as that individual Perk. It also allows us to fold Perks we liked from previous games into Perk ranks in this new system. For example, the Fallout 3 perk Paralyzing Palm (paralyze enemies through hand-to-hand), now becomes the Rank 5 Perk for Iron Fist. But you need to have chosen the previous 4 ranks of Iron Fist and be level 46. We also pushed old Perks to do new things at higher ranks. Strong Back doesn’t just up the amount you can carry; higher ranks of it allow you to fast-travel while encumbered or even run while encumbered at the cost of Action Points.

With each SPECIAL having 10 Perks, there are 70 base Perks. With Perk ranks, it increases that number to over 270. That number also includes a top-level Training perk for each SPECIAL, so that you can essentially skip a regular Perk and raise a SPECIAL by 1. This gives you the benefit of the new SPECIAL value, and allows access to higher Perks in future levels.

It may all sound complicated at first, and when you initially level up, the chart can be a little intimidating because you have so many options. But it’s incredibly elegant, and has allowed us to reward both investing early in a playstyle, as well as growing your character over the course of the game.

If you’re a longtime Fallout fan, you’ll notice that the Skills seen in previous games have been folded into this system. The previous Skill system had some confusing parts and ended up spreading your choices too thin. Some of you had questions like: “What’s better, the Charisma SPECIAL, or the Speech Skill? Why are assault rifles in Small Guns?” Additionally many Perks simply raised associated Skills. The Gun Nut Perk in Fallout 3 increased two separate Skills. In Fallout 4, the ranks of Gun Nut act as gates for modifying and crafting weapons. Sneak was a skill in Fallout 3, and you simply increased its value. In Fallout 4 Sneak becomes a Perk that not only makes you harder to detect, but wraps in previous perks like Silent Running and Light Step into its ranks. By wrapping these systems together, it keeps the emphasis on your SPECIALs and the level-up choices more rewarding.

And on top of all that, you also get separate Perks from the many in-game magazines you can find (there are over 100). Some of these grant an individual Perk, while others up the rank of a Perk associated with that magazine. For example, there’s a 10-issue run of Grognak the Barbarian comics that each give you an additional rank of the Barbarian Perk, which raises the critical damage of melee attacks.

Through the many years of Fallout 4 development, and the countless hours of playtesting, we think you’re going to love this system in action. We experimented with other systems, but found this one to be the most flexible and intuitive. Balancing all of the ranks, their individual efficacy, SPECIAL rank, and player level has been a huge task. We hope you enjoy it as much as we do, and share your character choices and playstyles with us once the game is out. We can’t wait for you to play.

PS – One more thing – we really love the idea of putting the Perk poster on our own wall, and think you will too. So every physical pre-order copy of Fallout 4 will come with one!

* There are a few exceptions to multiple Perk ranks. Some only have one rank, like the returning Awareness Perk. This perk lets you see the level and damage resistances of enemies during V.A.T.S. In cases like this, it felt bad to split that functionality into ranks. Fallout 4 does feature multiple damage types, primarily Ballistic, Energy, and Radiation. Knowing what weapons and armor to use at certain times is important.