Fallout 4, the massive action role-playing video game developed by Bethesda Game Studios and published by Bethesda Softworks has been out for a minute now. Our usual review period came and went, yet we had barely scratched the surface of this massively huge game! With the release of new add on’s and the arrival of mods on consoles (Xbox One), it’s well over time that we added in our 5 cents worth.

If you aren’t familiar with the Fallout series, firstly where have you been? Secondly, Fallout 4 is the perfect time to jump aboard this passing “Train, Train”. It was one of 2015’s most hyped games and rightfully so. With a recent run of sub-par triple A titles, it was refreshing to find that Bethesda has spent the time polishing what will be a game you play over the course of a year, loving every moment of it.

The gameplay isn’t repetitive or boring, which results in a type of freedom you’d expect from an open world game like this. You are able to explore, craft and travel through the map at your own pace. Do you like to spend most of your time crafting weapons, armor or maybe you like building the perfect town, decking out your killer pad (and by killer pads we mean cribs with sentry guns) with all the creature comforts. The main story is quite engaging this entities you to investigate the strange kidnapping of your baby son Shaun and the further the world at large.

What ever adventure you decide to embark on, action, surprise, and death could be around any corner. It’s not uncommon to accidentally stumble upon a camp of Super Mutants, fall into a pack of Feral Ghouls or have a shoot out with a gang of Raiders. Don’t forget about the mutated animals of Boston’s Wasteland, it might get a little bit unBEARable if you do.

Game mechanics are top notch, building can sometimes get a little frustrating when trying to perfectly match roofs and walls but you’re living in a post apocalyptic world, so what do you expect? The amount of content packed into this game is insane, and it’s only getting bigger.

In Far Harbor, a new case from Valentine’s Detective Agency leads you on a search for a young woman and a secret colony of synths. Travel off the coast of Maine to the mysterious island of Far Harbor, where higher levels of radiation have created a more feral world. Navigate through the growing conflict between the synths, the Children of Atom, and the local townspeople. Will you work towards bringing peace to Far Harbor, and at what cost? 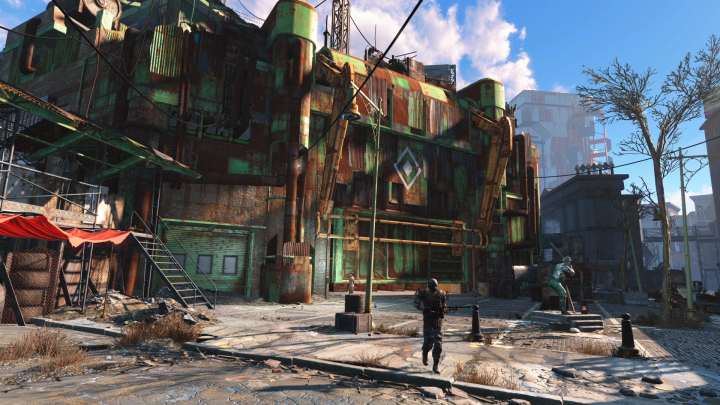 Far Harbor features the largest landmass for an add-on that Bethesda Game Studios has ever created, filled with new faction quests, settlements, lethal creatures and dungeons. Become more powerful with new, higher-level armor and weapons. The choices are all yours.

Stay tuned for more details on even more add-ons to be released in 2016, and on free updates like Mods which is now available on PC. Mods will be coming to Xbox One players later this month and to PlayStation 4 players in June.

All-in-all Fallout 4 is a winner. A true 5 star game, will we see Doom knock it from the top spot? Let’s find out!! You can purchase Fallout 4 here.