The charismatic HOOLIGAN HEFS, from Doonside in Western Sydney has announced his first-ever run of headline shows. The 21-year-old Australian rapper, who boasts more than 100,000 followers on Instagram and 17 million streams across Spotify, Apple Music and YouTube combined – will bring his mix of UK grime, drill and hardstyle to fans Melbourne, Brisbane and Sydney, beginning at the Corner Hotel on November 21. 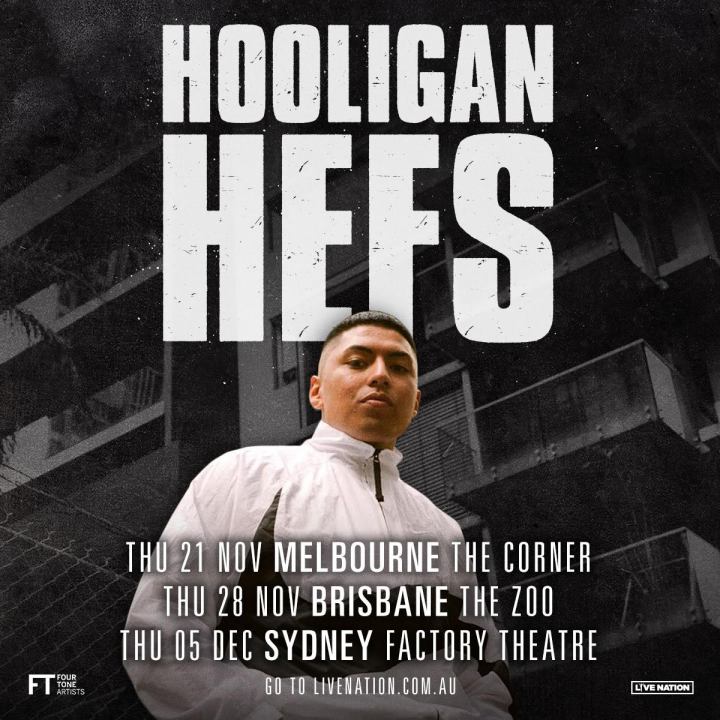 For complete tour, ticket and VIP Experience information, visit: livenation.com.au. Hefs may project a hardcore image, but he’s really about the party. While growing a strong following he has managed to maintain a high level of mystique, becoming recognisable for his motto, “Tell ‘em I’m doing eetswa.”

His hi-NRG singles, ‘The Party’, ‘No Effect’ and ‘IYKYK (They Know Who)’ have racked up more than 8.2M streams on Spotify alone after being released independently across the past few months. Not only that, but his video for ‘Off Guard (Freestyle)’ #1 on YouTube shortly after its release and now holds more than 1M views – pretty impressive for an independent/unsigned 21-year-old.

“I’m trying to do rap and techno, EDM, dubstep – all of that. Hopefully, this is the new Australian sound.”

Don’t miss one of the fastest rising talents in Australia’s rap scene as Hooligan Hefs takes on his first-ever headline shows this November.

Tickets On Sale 10Am Friday, October 11