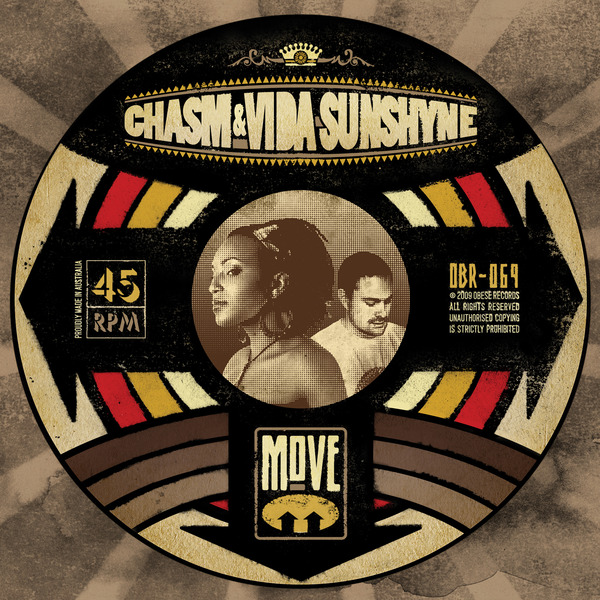 He is Chasm, Sydney-based producer-extraordinaire who made his mark in 2008 with the Triple J feature album debut Beyond The Beat Tape. She is Melbourne-by-way-of-Ghana’s Vida-Sunshyne, and the enigmatic voice featured on both Beyond The Beat Tape and Astronomy Class’ Pursuit of Happiness. Together they are an electric collaboration of musical talent; one half behind the boards, creating the template for a limitless sonic foundation. The other, centre stage; creating the connection between performer and listener.

The pair have created Move, the brand new album that traverses the global spectrum of soul, reggae, and hip hop. It is a combination of styles and performances that raises the bar for Australian music.

The new album artwork for Vida Sunshyne and Chasm’s album Move has been released today,  a cool  throw back to an old 45 vinyl sleeves, Aprill77 has brought a slick look to Obese’s 69th release. The album will hit shelves October 23 and features Damajah, Million Dan, Mantra and Mista Savona.

If you can’t wait for the release date then you’ll be happy to hear that a mixtape will be out soon to get your taste buds ready for the main course. Titled Fire In The Building and Mixed by DJ Diaz, Chasm & Vida Sunshyne are sure to bring something red hot. You can check out Vida MySpace page here and Chasm’s here.

Vida Sunshyne will be appearing at the High Vibes Festival on September 20 and then on a host of dates with Astronomy Class in late November.