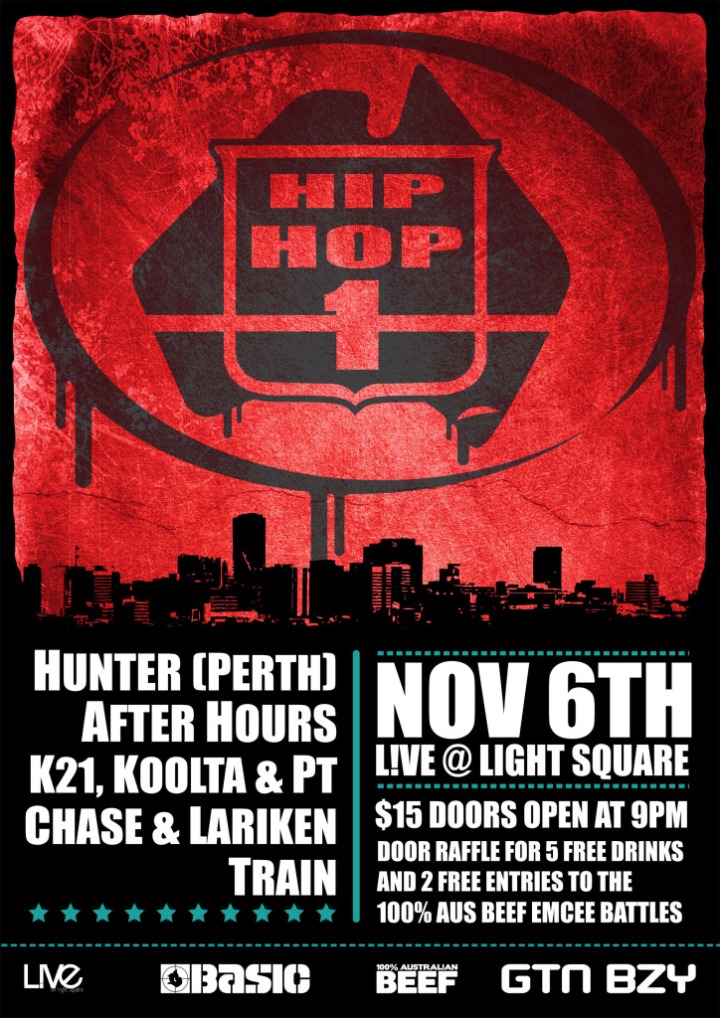 Come down to L!VE on Light Square, November 6 for a huge night of raw aussie hip-hop. Hunter (SBX Crew) drops in all the way down from Perth, supported by After Hours (Certified Wise), K21 feat. Koolta & DJ Pt, Chase,  Lariken and Train.

If you don’t know already, here is a bit of a bio on each artist.

Hunter – Myspace / Facebook
Hunter, born in Yokine, emerged as one of Perth’s most venomous Battle Rappers, slaying crew’s throughout the 90’s and well into the new millenium. He released his first album with Dazastah from Downsyde, called Done DL.

The last ten years have also seen Hunter collaborating with a range of people such as Funkoars, Matty B, Clandestien, Downsyde, Drapht, Layla, Infallable and Miss Cheek. He has also appeared on compilation albums including 2 and 3 of the Culture of Kings series and Obesecity and has just released his first solo album Going Back To Yokine.

After Hours – Myspace / Facebook
After Hours are from South Australia, hailing from the almighty Certified Wise Crew. After Hours is Headlock, The Editor, Integer (aka Intalekt) and DJ Jugular, aussie hip-hop veterans with releases such as Different Rules Apply & a classic in A Hero’s Turf they have also had many guest spots and tracks on compilations such as Culture of Kings 1, 2 & 3, Obese City, Suffering City, 15 Oz Vinyl, Reason – Reography, Funkoars – Who’s ya Step Daddy, Train of Thought – Moving Heads, Hilltop Hoods – The Calling, Defenders – Self Defence, Hospice – Visiting Hours, K21 presents – The Greenhouse & Terra Firma – Music to Live By.

K21 – Myspace / Facebook
It all started in 2005 when a then 15-year-old hip-hop lover decided to venture into a world of making his own music. Armed with nothing more than an old computer, a handful of records and the knowledge of what he thought was dope, K21 began his voyage.

2009 is set to be the year K21 makes his move. Having already tested the waters with his production album K21 Presents: The Greenhouse, gaining crucial onstage experience and becoming a self motivated business minded musician.

Koolta – Myspace / Facebook
Koolta is a highly respected emcee and producer. Koolta has shared the stage with many prominent artists such as C-Rayz Walz, The Funkoars, Pegz, Drapht, Terra Firma and many more.

Last year he featured prominently on K21’s Greenhouse compliation, and both produced and featured on Grifter’s Inc – Creature Of The Night album. 2009 is set to be a big year, as he is planning to drop his debut album.

PT – Myspace
Over the last few years Paul has been making a name for himself by DJing for acts such as K21, Koolta, Grifters Inc, Realizm and Chase.

He has performed alongside acts such as The Funkoars, Terra Firma, Drapht, Adroit Effusive and C-Rayz Walz. He will feature on both Koolta’s and K21’s debut albums in 2009.

Chase – Myspace / Facebook
Chase was born in 1985, and first introduced himself to the aussie hip hop scene as a graff writer early in 99. By about 2002 he was into writing his own lyrics and entering battles. He has won such events as:

He has also competed in the world rap championships jump off 2 on 2 battles. Although Chase still battles he is now concentrating more on his recorded music, spitting that raw hard hitting lyrics over banging beats from producers such as Engineer (Canada) and Squared(Japan/Aus)

Lariken – Myspace / Facebook
Lariken is a young lad who is rising through the ranks by winning many recent emcee battles and doing live shows regularly, his aggressive style and hilarious antics have made him a house-hold name in the aussie hip-hop community.

Train – Myspace / Facebook
Train, not your typical type of rapper. Musically and artistically balanced, He creates hip hop for many different listeners and performs at a standard higher than many. He’s been an emcee for 8 years now and has entered a couple of emcee battles in his time such as the Double or Nothing series back in 05 and pushes a hard headed freestyle. After many years of honing his skills Train’s debut mixtape is about to drop for release around Australia, always putting in work and forever dedicated to the true artform of aussie hip hop.