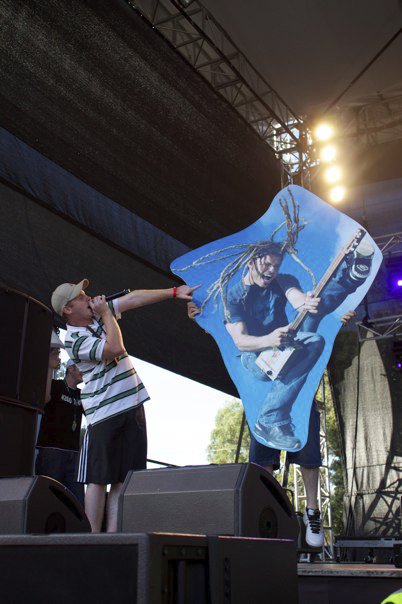 The lads over at Golden Era, The Funkoars thought it was about time they sent in their top 10 songs for 2009. Even though voting has already closed, it’s good to see what the guys were feeling last year.  The Funkoars and Trials top 10 are listed below.

MC Trials – Top 10 for 2009
Bloody Beetroots – Awesome
Dan Auerbach – I Want Some More
The Dead Weather – Treat Me Like Your Mother
N.A.S.A – Way Down
Kasabian – Where Did All The Love Go
King Khan & The Shrines – Land Of The Freak
Mos Def – Auditorium (Purely for Rick)
Street Sweeper Social Club – Clap For The Killers
Tame Impala – Sundown Syndrome
Urthboy – Shruggin

Seems the Funkoars know how to make their vote count HA!

In related tour news, on the back of the phenomenal success of The Funkoars and Ash Grunwald collaboration on the track ‘Little Did I Know’ – February 2010 sees them pull a stellar double-header show together when they join forces for a special run of dates in Sydney, Melbourne and Brisbane.

With a history running almost 10 years, four albums under their belt, as well as far too many guest appearances and production credits to list, The Funkoars are veterans of the Australian hip-hop scene.
On stage, just as on record, the live shows are Big. Big bass, Big hooks, Big wordplay, Big crowds. The Funkoars are renowned for their remarkable live shows, delivered with a brilliant sense of humour, with bangin’ beats, magnetic stage presence and contagious energy, with their usual level of debauchery thrown in.

True to their hard-working nature 2009 saw the band release 2 albums “The Hangover” and  “The Hangover Premium Edition” – and also undertake 2 major national tours. The Adelaide locals and veterans scored plenty of accolades on the road as they took cities and towns by storm with their standout brand of Hip-Hop, and added newfound devotees wherever they went to their ever-growing fan base.

2009 also saw The Funkoars celebrate joining the Golden Era Records family – the newly formed label by fellow Adelaide Hip Hop Legends the Hilltop Hoods – with an all-new “Hangover”. This Premium Edition version of “The Hangover” not only includes the hit singles ‘Black Sally’ and ‘What’s Your Malfunction’, but also the remarkable new track ‘Little Did I know’ which brings them together with ARIA nominated artist Ash Grunwald, and is the inspiration behind the forthcoming run of shows.

With massive support from Triple J over the past year – high rotation airplay and feature album with “Hangover” its no surprise ‘Little Did I know’ is up for voting in Triple J’s Hottest 100. Voting opens at 9am Monday 21st December and closes at midnight (AEST) Sunday 17th January 2010 – details here on how to vote for ‘Little Did I know’ – here.

You can catch The Funkoars and Ash Grunwald at the following venues: