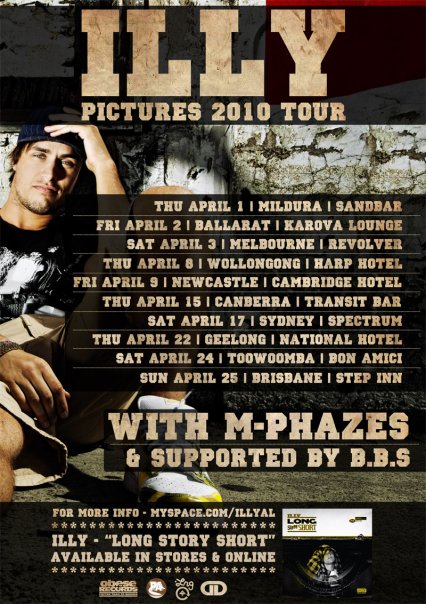 With Illy’s single Pictures landing at #66 on Triple J’s Hottest 100, Illy has lined up a spate of shows through the month of April in support of its success, dubbed the Pictures 2010 Tour. The tour comes on the heels of the recent announcement that Illy will be one of the few hip-hop acts to be part of this year’s Groovin’ The Moo festival set to take place through May.

With a new set that will include previews from his upcoming sophomore album, Illy has tapped local Melbourne hip hop crew BBS to support. Illy’s set will be accompanied by DJ/producer M-Phazes, fresh from the release of his much heralded debut album, Good Gracious.

The tour kicks off April 1st and will make its way up and down the East Coast including stops in Canberra, Toowoomba and Wollongong.

To help celebrate, a special edition Long Story Short Acoustic CD (prepared by DJ Joyride) will be available exclusively on the tour, featuring acoustic takes on some of the most popular songs from Long Story Short, as well as bonus track Where Is My Mind, Illy’s contribution to Triple J’s Like A Version.
Full dates are listed below.