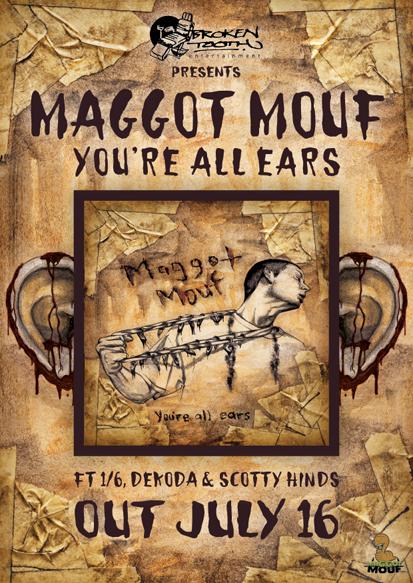 Maggot Mouf starting in 98 writing raps in government flats. He then moved on to the open mic and battle scene – holding it down throughout the ACT. After years of burning weak cunts and getting a name for himself, he co-formed Canberra’s alikeminds crew in 2002 and took the live show scene by storm supporting the likes of Jungle Brothers, Braintax, Disorder, Mystro, Lyrical Commission, Reason, and Hospice Crew just to name a few.

In 2005 Maggot Mouf relocated to Melbourne and met up with old Canberra counterparts, the Hospice Crew, which saw the recording of Read ‘Em and Weap. The song made it to the monolithic Visiting Hours project, and Maggot Mouf has since scooped up beats and worked on projects with numerous Hospice members and Melbourne locals. You’re All Ears features guest spots by Dekoda, 1/6 and Scotty Hinds. Production by Joey Gargoyle, Ciecmate, C-Rodent, Mizari, Bigfoot, Must And Sammy Scissors. Cuts by DJ Paypercutts, DJ Buick, and Sammy Scissors.