In 2008 Bliss N Eso released their 3rd studio album Flying Colours. It went on to receive critical acclaim and broke many records in the Australian Music industry. In 2010 […]

In 2008 Bliss N Eso released their 3rd studio album Flying Colours. It went on to receive critical acclaim and broke many records in the Australian Music industry. In 2010 Bliss N Eso return with their highly anticipated 4th studio album Running On Air!

Over the past 6 months BnE have been writing and recording in a secluded location in the middle of the Victorian mountains to produce a highly diverse and organic record following a natural evolution from the strength of Flying Colours. The album features production by Hattori Hunzo, Matik, M-Phazes & Bliss as well as guest appearances by Kasey Chambers & Shane Nicholson, Mind Over Matter (Aus), Jehst (UK), plus hip hop legends from the US:
Xzibit and none other then the RZA from the Wu-Tang Clan!

Bliss N Eso have also once again hooked up with Steve Cross to produce a 3 piece painting series for the album artwork – Grab a physical copy of the album to see it in all its glory. Running On Air will be available in stores and Digitally from Friday July 30 – Preorder your copy here. 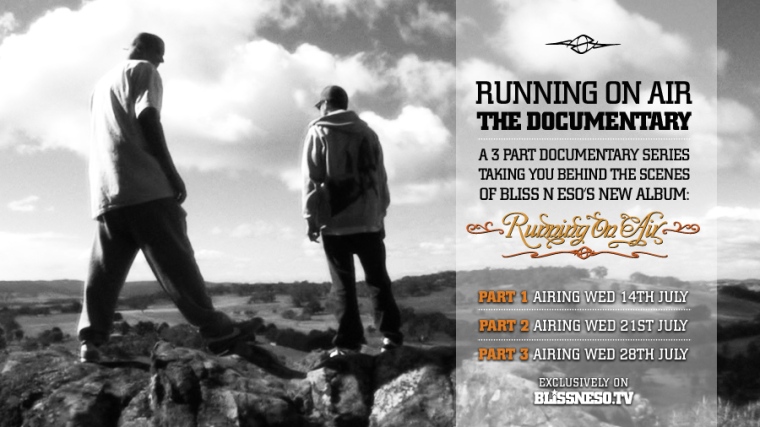 Running On Air ~ The Documentary
Over the coming weeks Bliss N Eso will be releasing a 3 part documentary taking you behind the scenes of their new album Running on Air.
The series follows BnE from the Flying Colours Live Tour last year through to the middle of the Victorian mountains in 2010 where Running On Air was written and recorded. This documentary gives you a unique insight into what inspires the group and how the album came together. Stay tuned to Blissneso.tv over the coming weeks as we relesae a new episode each week.

Part 1 will air this Wednesday July 14.