So now after many paths traveled Karsniogenics is heaps proud to announce the official release date for the long awaited debut album from The Statesmen, aptly titled Drama To The Finish.

Available at all good stores including JB-HiFi and iTunes, the album drops November 19th, through new distribution partners Obese Records. To fire it up a little the guys are dropping the next joint free in the coming weeks so keep yo ears to the tweet street for that one. In case you missed the first single download Whatever The Cost feat. Lazy Grey you can steal it guilt free below.

To many Brisbane locals, The StatesMen’s Sean B & Dcide (aka DJ Dce), are synonymous with the city’s hip hop scene. They’ve not only spent 18 years collectively on radio and behind the boards with 4zZz’s PhatTape Hip Hop Show, but have also appeared as artists on a wide array of Australian Hip Hop releases, many since revered as pure classic’. Two years in the making, The StatesMen’s debut album, Drama To The Finish authentically defines the process for these two pioneering creatives, as the road here has been brutally long and seen many adventures, all of which are wrapped up in this graphic body of work.

Sean B’s first love for hip hop sparked deep within during his early days growing up in Melbourne. In the late ‘80s, the emcee recorded his first tapes with DJ Idem as the crew Positive Direction before moving to far north QLD where he established Cairns’ first hip hop radio show on 4CCR in the early ‘90s. After laying down roots in Brisbane in 1995, Sean promptly joined DJ Katch at 4zZz radio station and continued to host its PhatTape show for just over a decade, earning it the title of Australia’s longest running hip hop show. It was during this thriving time in the river city that Sean honed his production skills and was equably encouraged by the results – he was instrumental in the beginnings of the well renowned and commercially successful Resin Dogs.

In 2000, he further flexed his flair producing and appearing on releases from underground kings including Lazy Grey’s and Brad Strut’s debut albums, to many guest spots on various compilations since. A seasoned digger and traditionalist at heart, Sean’s true depth as an artist is explored and expressed throughout Drama To The Finish, with both his skills on the mic and on the beats delivering the solidarity you’d expect from a veteran player such as Sean B.

With a history crossing borders of graffiti to designer to producer and DJ, Dcide (aka DJ Dce) needs little introduction to most aus heads in the know these days. He’s spent the better part of his conscious life devoted to hip hop, period. Dcide’s early days consisted of prolific writing alongside some of Australia’s finest pioneers, to being somewhat instrumental in establishing some of today’s more infamous crews. Since directing his talents to djing and production as his creative hip hop outlet after becoming a fulltime Art Director/Designer in the late ‘90s, Dcide’s musical credentials and prodigious output speak for themselves. Just take a peak at his comprehensive discography to date as proof. He joined 4zZz’s PhatTape crew in 2003 and 7 years on remains as the Executive Producer and Co-host. Add to that designing over 15 album covers, countless promotional artworks in print and online, plus Director/co-owner of Karsniogenics, its apparent Dcide is not shy of bringin’ ‘n’ maintainin’ the heat the ‘K’ name is well known for. Coming fresh off the release of Lazy Grey’s critically acclaimed ‘The Soundtrack, The StatesMen’s – Drama To The Finish is the next installment in an already healthy career for this Australian hip hop all-rounder.

With their state of affairs well in order, The StatesMen are set to ‘blam the shitta outta yo speakers’ early 2010 with their epic debut album Drama To The Finish; featuring guest appearances from Lazy Grey, Bias B, Jake Biz, Bigfoot, Miss Brown, Marvel (Pure Product), Milesago and Marvin Brown.

For now, you can enjoy the free download of Whatever The Cost feat Lazy Grey, grab it below…
Make sure you check out the guys webpage here. Stay tuned for more! 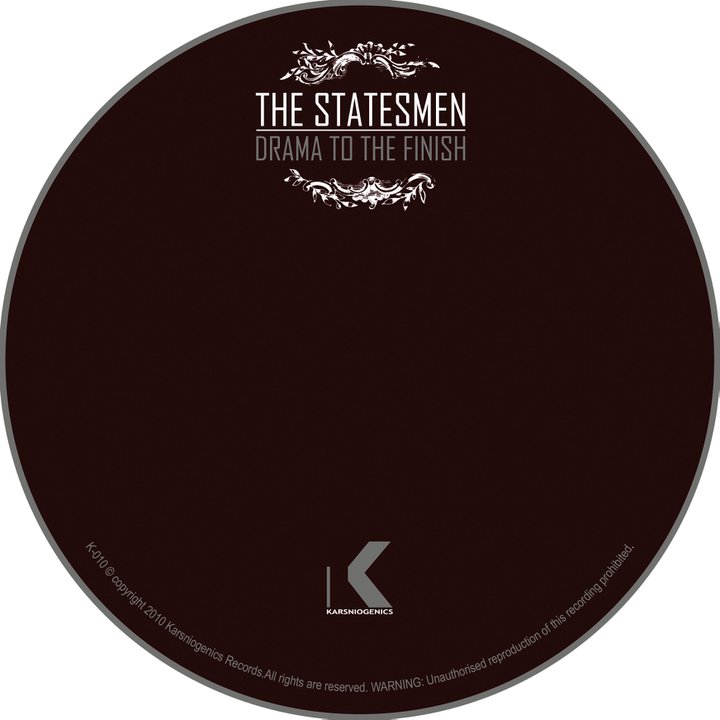