A stalwart of the Melbourne music scene since the mid 90’s, Bigfoot needs little introduction to those with an ear to the underground. Etching out a reputation for thunderous production, aggressive flows and a formidable stage presence, Bigfoot has been a scene-stealer since day one.

Following the momentum created by his regular appearances on the now legendary PBS Formula sessions, Bigfoot began his reputation as a prolific guest-spot killer with his verse on Brad Strut’s Authentic LP in 2001, and he soon appeared on studio tracks and live bills with the likes of Bias B, Tornts, Hospice Crew, Brothers Stoney and Reason. As the buzz intensified, he released the Footprints 12″ in 2004 which has become a much sought-after collector’s item.

Building on his close ties with members of Queensland’s 750 Rebels, Bigfoot temporarily relocated to the Sunshine State, where he dropped yet another devastating guest verse on Lazy Grey’s – The Soundtrack. People were starting to wonder when he would drop a full length album of his own. Giant Steps is what the fiends have been waiting for. It marks Bigfoot’s emergence from the underground into the upper echelon of Australian Hip-Hop, and years spent building his strength as an MC and producer have paid off with this stunning debut.
“I didn’t want to just slap together a sub-par album and throw it out there,” explains Bigfoot “It’s been so long in the making that I had to make it worth the wait.”

Opener Stepped On is a driving electro-fuzz stampede laced with an unrelenting verbal tirade that harks back to Bigfoot’s days spent on the battle circuit, while What Goes Around and Stop are mercilessly dramatic street stories detailed over eerily hypnotic backdrops. Can I Kick It? is an energetic workout that sees Bigfoot teamed with Bias B for some tongue in cheek verbal sparring, with the Melbourne veteran also trading rapid fire verses over Burnin’ Hot, a blisteringly paced microphone meltdown. With Giant Steps, Bigfoot proves his versatility: one minute it’s the smooth fusion of Bigfoot and Dialectrix on We Got That with dialogue delivered deftly over the fluid instrumental. 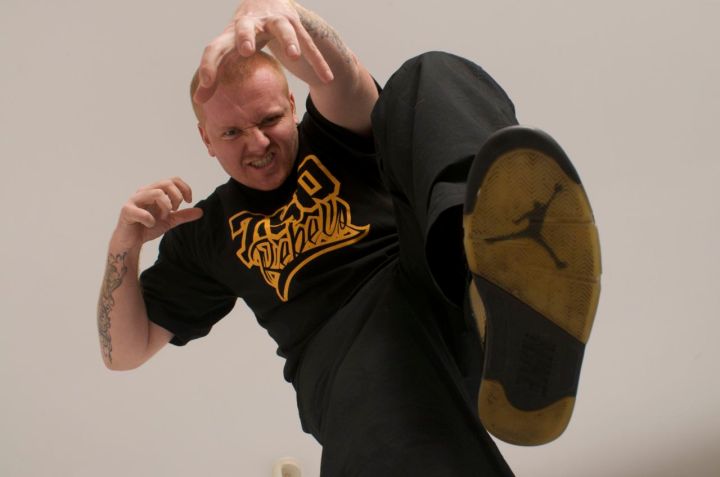 The next, it’s Bigfoot and his Hired Goons crew letting loose on Hell’s Gates, with Tornts, Fletchrock, Billy Bunks, Gargoyle and Ciecmate all proving their prowess over an ominous track. Sucker M.C.’s finds Bigfoot and the 750 Rebels paying homage to their influences over a spine chilling banger laced with old school hip hop, and Round & Round takes us on a bleakly introspective journey tinged with a touch of soul courtesy of Muph and Miss Brown, lamenting the burden that comes when every- thing feels like it’s about to fall in on you.

Rounded out with additional appearances by Brad Strut, Fluent Form and Brothers Stoney, Giant Steps is an epic ride through the mind of a Melbourne emcee and producer at the peak of his powers, not just living up to expectations, but surpassing them. Keep an eye out for some music videos on their way!