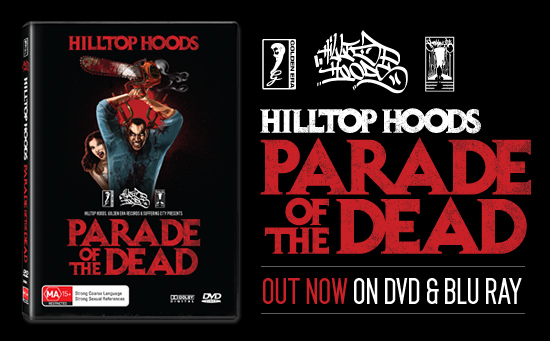 In 2010 a virus spread throughout the worlds population killing millions and turning many survivors into mindless zombies. Around the same time of these apocalyptic events the Hilltop Hoods were due to make a DVD for their album ‘State of the Art’.
As civilisation collapsed, people died in the streets, thousands starved.
The Hoods were so self-involved they made their DVD anyway.

‘Parade of the Dead’ is out now on DVD and Blu Ray! The film is a mixture of live music and interviews and features appearances from Scott Dooley, Funkoars and Briggs.

To see footage from ‘Parade of the Dead’ visit The Hoods YouTube channel www.youtube.com/hilltophoods