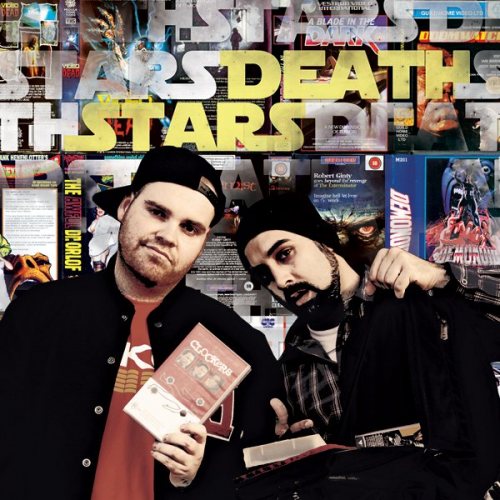 Death Stars is a throwback to colourful video stores, puffy VHS jackets, and pays homage to cinema’s greatest movie composers with slick samples, inventive pop culture infused lyrics, and a masterful overtone of well crafted production. It’s a seven track EP that is dynamism personified; an ensemble of razor edged wit, served alongside heeded warnings of not feeding the Mogwai after midnight, and shrilled screaming from muscled Austrian’s about getting to the chopper.

Both artists are no strangers to the aura of success; Syntax’s 2010 debut The Musical was credited with a whole swag of four and five star reviews (definitely one of our favourite releases from 2010), and branded the Gold Coast turned Melbourne rapper with a positive stigma as one of Australia’s most notable rap vocalists. As a music man, Mules is well versed in the trade of effortless production. As one half of the duo Choose Mics, his music has earned him production credits among Australia’s most prolific artists, and critical acclaim as the producer for the international collaboration project Raw with US artist Quite Nyce.

Every song on Death Stars features a prominent sample from a Hollywood film score, effortlessly looped and pushed through the Death Stars razzle dazzle filter; the ultimate synthesis of rap and nerdish fixations for the local video store. Death Stars will be available for free download from July 15, 2011 at the official Death Stars/Bad, Meet Evil website www.deflectorshields.com