Quakers is a hip-hop collective boasting 35 members which orbits around a core of three producers: Fuzzface, 7-Stu-7 and Katalyst. Fuzzface is better known as Portishead’s Geoff Barrow, a long-time Stones Throw supporter in touch with Peanut Butter Wolf since championing the Jaylib album back in 2004. 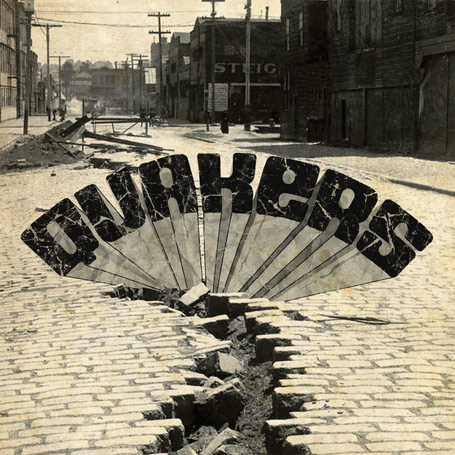 7-Stu-7 is Portishead’s engineer and in-house producer at Invada Records in the UK. Katalyst is one of the most respected producers in Australia and a partner in Invada Records.  Disillusioned with much of the hip-hop around them, the like-minded producers set out to create the type of rap record they’d want to listen to. That meant gathering one of the most varied arrays of talent ever seen on a hip-hop record.

Rather than just sending beats to the hottest names of the moment, the producers sought out genuine collaborators, regardless of whether they were legendary or simply stumbled upon around the world wide web. Invitations were sent out to golden era legends such as Prince Po and The Pharcyde’s Booty Brown, indie rap titans such as Dead Prez and Phat Kat, and of course some of Stones Throw’s finest: Aloe Blacc, Guilty Simpson, MED and newest signings Jonwayne and Dave Dub all make memorable contributions.

There are also some lesser known talents present: band-favorite Coin Locker Kid, Lyric Jones, Estee Nack & more hold it down with their more celebrated peers. Yet for all the vocal talent, it’s often Quakers’ stellar production that takes center stage, tying together the albums 40+ tracks into a cohesive whole. Heavy beats come thick and fast, from the horn-heavy stomp of Fitta Happier to the devastating synthesizer abuse of Belly of the Beast and beyond.