James Reka is a young contemporary artist based in Melbourne, Australia. Since 2002, Reka has established himself as a pioneer in Melbourne’s burgeoning street art scene. His origins lie in the alleyways and train-lines of the city’s inner-suburbs, and his popularity has seen him grow to being exhibited on gallery walls the world over.

His character work has come to represent the beginning of a new style of street art – surrealist, abstracted creatures emerging from the depths of Reka’s mind, communicating through strong lines, dynamic movement and bold colours. Theses figures haunt the laneways throughout Australiasia, clambering up brick walls and giving the urban environment a literal fresh coat of paint. Their personalities mirror those of their often-decrepit metropolitan context, opening a dialogue between the viewer and their surroundings. With influences in pop culture, cartoons and illustration, Reka’s style is instantly recognisable and respected within the community.

This style emerged from his Pop Art influenced logo design skills, featuring simple but striking lines and colour ways. Through these origins, Reka has developed an incredibly diligent, almost obsessive attention to the technical proficiency of his work, and it has moved him towards producing ever-increasingly meticulously detailed work. His pieces sit somewhere between humourous and menacing, contrasting the two opposing feelings in a way that is unique to his vision. The pseudo-human forms are recognisable but isolating and playful yet eerie. This is Reka’s art: a paradox between sharp design and graffiti, held together with a fuse of passion and spray paint.

His handiwork can be seen on both street and gallery walls from Melbourne’s inner suburbs to high-rises in Japan. Reka’s paintings have recently been acquisitioned by the National Gallery of Australia for their permanent collection, cementing his place as one of Australia’s most respected contemporary street artists. After a ten year career defacing the streets and gallery walls of Melbourne, Reka is packing up, moving overseas and having one last hurrah. Backwoods will be holding an “open studio” in the gallery for one night only, displaying a new body of work exclusively painted on found objects. 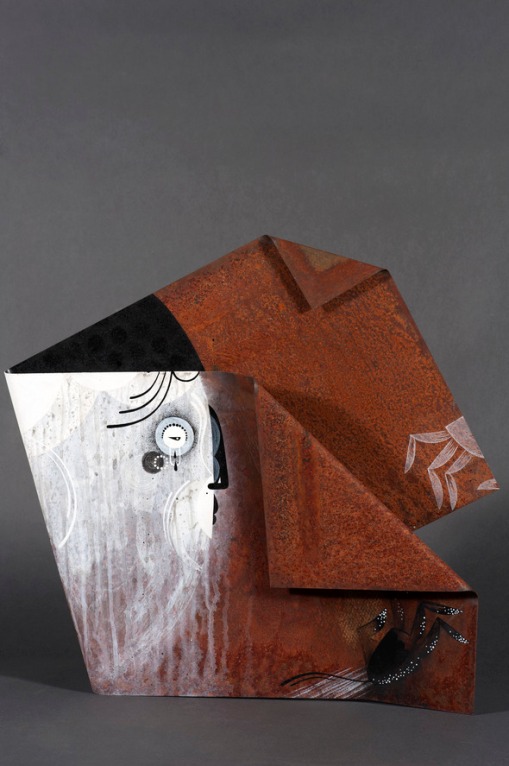 Using spray cans and rusted metal found from walking the train lines and abandoned factories, Reka has organically used each aspect of his natural element to create a process-driven concept, turning everything from the cans’ paper labels to the folds of oxidised sheet metal into self-contained artworks. On June 20th, Reka is opening up his studio for a behind the scenes look at his new paintings and mixed media works, plus throwing in some paintings from the past decade for good measure. It’ll be an exhibition and leaving party all rolled into one, so come down and join Reka for a one final beer.