Sydney hip hop duo Spit Syndicate return in 2013 with third album Sunday Gentlemen. After the success of previous releases Towards The Light and Exile, a hungry fan base have been waiting anxiously for the next instalment from Spit Syndicate. We catch up with emcee Jimmy Nice of the Double S, on the eve of the Sunday Gentleman release, here’s what he had to say. 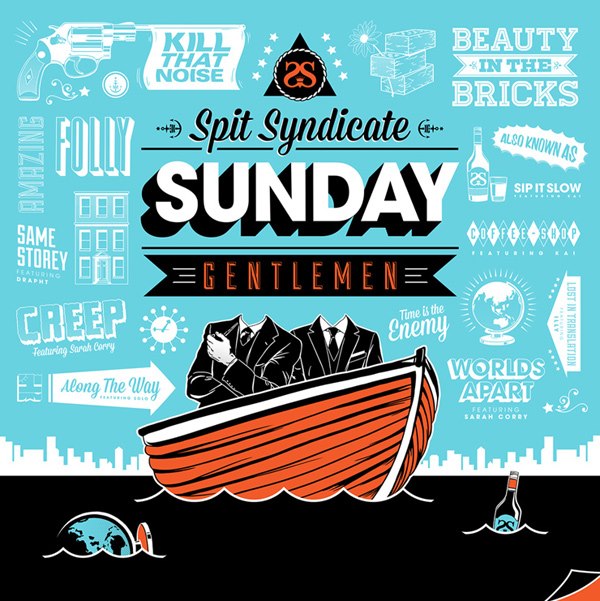 aahh: What’s the first thing you guys plan to do on release day?
Jimmy Nice: I’m actually working on release day. Release night will be a different story. I may hold off on full celebrations untill the 24th. The One Day Crew are putting on the first in a series of monthly parties called One Day Sunday. Sunday will be our best opportunity to get loose.

aahh: Sunday Gentlemen is quite an interesting title. Can you explain the concept behind the title and how it ties in with the overall themes of the album?
Jimmy Nice: The name Sunday Gentlemen came about one night when we were coming home from the studio. We had stumbled across a bunch of books and random things people had thrown out. I saw a bunch of books sitting there and this hard cover book jumped right out at me. It was really nice, I usually like taking things like that home. When we got home, we had a read through and realised the book was Sunday Gentleman by Irving Wallace. Irving was a writer of his own choice, working six days of the week to keep the lights on. Sunday was the only day he kept for his own works. That screamed out at us. We find ourselves in a very similar situation, in how we make our music. It’s the 9-5 all week and then we write and perform on the weekends. We don’t yet have the luxury of making music as our job to keep the lights on.

aahh: Beauty In The Bricks was the first single released from Sunday Gentlemen and was produced by fellow One Dayer, Adit. What was it about this track, that attracted you guys to release it as the first single?
Jimmy Nice: This was a song we finished really on, actually it was the first beat we worked on with Adit for the whole project. We never really started writing it as the lead single. As with other tracks, it was going to find it own place on the album.
It’s a personal song, about two different views on relationships, mine and Nicks. We didn’t really write it with that hook in mind (…hums beauty in the bricks), it was just a bridge between the first verse and second verse. While we were in the studio recording we couldn’t figure out a chorus, we were honestly stumped. So we went with the bridge and it turned out really cool. It was the right song for us to come back with, we’ve been away now for 2-3 years. This track is a really good way to welcome new fans to our music and it’s a good indication on what the rest of the album sounds like.

aahh: The clip for Beauty in The Bricks was filmed in and around Sydney. Would you agree that the imagery of the clip reinforces the main themes of the track?
Jimmy Nice: Along with being personal and emotional, the track was also a little ode to the city. As Sydney siders ourselves, we don’t usually get the opportunity to see or explore the rest of the city. We all get comfortable, with where we live, usually going to the same places without really getting out to new places. We went to these little pockets in Sydney, spots of beauty and took full advantage of it. The clip was shot over two days and it was painless.

aahh: The second single titled Folly, has a bit of a different vibe to Beauty In The Bricks, and is produced by Stylez Fuego. What was it like working with that guy?
Jimmy Nice: That was new for us, we spent two weeks in Melbourne linking with various producers. We usually contact producers and spend the time with them. We’d be spending days on end in the studio. The session with Sylez was an inspiring experience and was great to see. Stylez Fuego is a gun and he works really quickly. On the first day, he did a quick mock-up of a beat and I wrote my verse in the studio to that. On the last day of our time with Stylez, the beat you hear on the track came to be. It was a nice new experience and really placed an emphasis on how far we’ve developed..

aahh: How would you describe the differences between Sunday Gentleman and say your last release Exile?
Jimmy Nice: Yeah, I don’t think we’ve steered to far away with what we’ve presented with Exile. Both releases have similar themes, both are very honest and high energy, a lot of light and shade, the whole creative process really has matured. Adit’s production is a lot more experimental now. We’ve been a lot more experimental in our vocal delivery, trying to incorporate new things and push it further. It’s not a ridiculously different approach to Exile but people will see the progression.

aahh: There’s been some amazing artwork released in association with Sunday Gentlemen. Both singles have had some killer covers done and of course the album cover is quite different to what we would usually see. Who’s been handling the design and how does these designs tie back to your music?
Jimmy Nice: We had an idea, and  a vision of what we wanted for the artwork. We really wanted it to tie in with the themes of the album. April77 Creative handled both single artworks and the album cover. We’ve worked with him previously on Exile, and Towards The Light. He knows what we are like. The main challenge was how to properly convey the themes within our music, how do we translate that to the visual. It’s hard to tell how people will respond to it. I really like the finished design, it’s something new and different. Again, I’m not sure how  some people will respond to it. I think cover design is highly important. That artwork and imagery ties to your identity, you should take it as seriously as the music inside the cover.

aahh: I want to ask you about ObeseTV, you guys featured in Episode 1 of the new show and have been with Obese Records for quite sometime now. We’ve seen a lot of artist in the past start their owns labels etc. Do you plan to stay with Obese for the foreseeable future?
Jimmy Nice: Obese was our start and it was for a lot of other artists, for now our focus is solely on this record. Not where we will be one year or even five years from now. We’ve been working on this record for two-three years now and we just want to get the most out of this release. Who really knows what the future holds.

aahh: You have a huge national tour coming up soon with Jackie Onassis, what’s some of your favourite things to do while on tour?
Jimmy Nice: Eat… dumplings are always a favourite. We like to check out new spots, enjoy the time away. A lot of us are leaving jobs and mundane shit like that. Any chance to get away with a great group of friends is always enjoyable, and with these guys it’s a real privilege. The songs you spend two-three years recording, writing and polishing, the real reward is when you take them on the road and see the people enjoying them.

aahh: The One Dayer crew recently unleashed a brand new podcast titled One Day Radio? And I believe that you guys are also holding a monthly event in Sydney. Is this the first steps in seeing more content coming out from the One Dayer Crew as a whole?
Jimmy Nice: Definitely, that’s been our little banner we’ve been riding under and it includes Spit Syndicate, Horrorshow, Joyride and Jackie Onassis. We all grew up together, went to school together and make music together. We really want to strengthen that connection, and have it more as a collective as appeased to four different acts. These guys are family and people we see on the reg, it’s not just different acts coming together, we all share a strong bond. Anything we can do to strength that brand is a positive.

aahh: We have all heard that the legendary Nas is hitting our shores for the movement festival and Spit Syndicate have been lucky enough to be named on the bill. Nas has been pretty influential in a lot of artists careers here in Australia. Are you the same?
Jimmy Nice: Definitely, Nas is one artist we’ve looked up too and who has had a big role in influencing our music. It’s hard to tell how it will go. Obviously with festivals like this we’re not at the top of bill, buts it’s good to get up and do your thing. It’s also a great opportunity to expose your music to people who might not have seen it otherwise. It’s a great opportunity and we jumped at. It’s inspiring to see artists like Nas and Bliss N Eso on the bill, people who you look up to. It’s a great privilege to share estate with the real kings.

One thought on “Spit Syndicate Interview: Sunday, One Day.”