Obese Records, Australia’s first hip hop label, was established in 1995 as a small record store originally named OB’s. After the business was bought and renamed by Tirren Staaf (Pegz) in 2002, the label was created as an outlet for the distribution of Australian hip-hop. 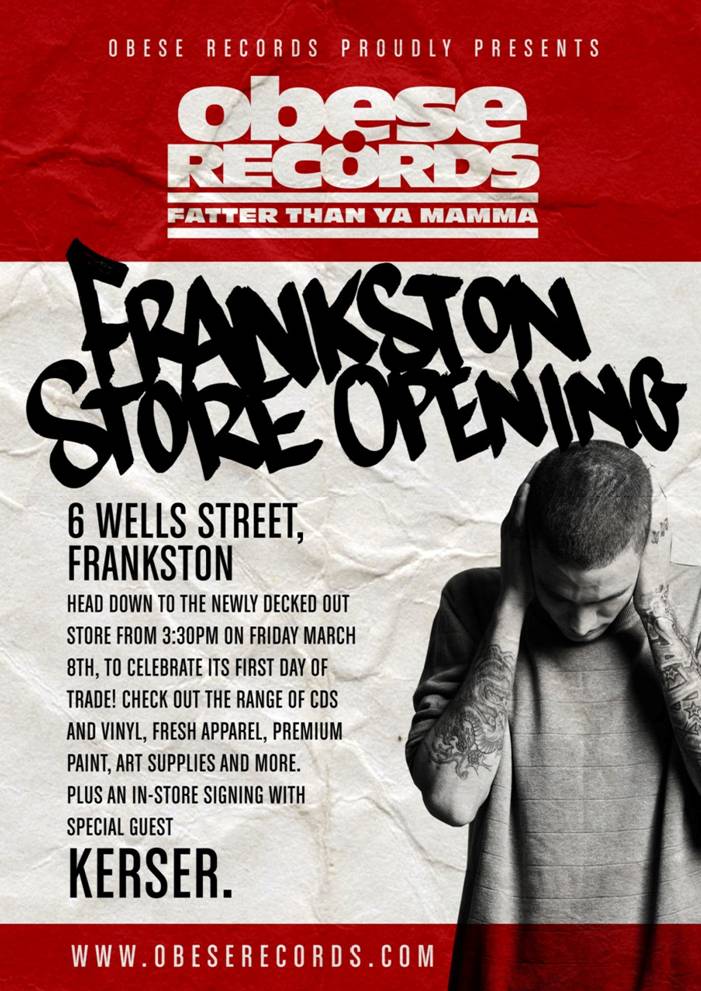 Melbourne’s emcee Reason with his album Solid, was the first release on the label, closely followed by the scene-defining Culture of Kings and Obesecity compilations. Over the course of its twelve years, Obese Records has seen success stories such as Hilltop Hoods, Muph & Plutonic, Drapht, Illy, release award winning albums, play to crowds of thousands at Obese Block Parties, and cement their places in Australian hip hop history. Current artists on the roster include Plutonic Lab, M-Phazes, Dialectrix, Thundamentals, Spit Syndicate, Pegz, Chasm and more.

As the label continues to wave the banner for credible hip hop releases in Australia, the demand for distribution has increased. Boasting industry stalwarts such as Broken Tooth Entertainment, Crate Cartel, Wordburner/Bias B, Lookup and Karsniogenics, Obese Distribution umbrellas over 100 of the country’s finest hip hop acts. Managed by Frank Mincone, The Prahran store (4A Izett Street) has become a hip hop mecca in Australia for committed fans, hosting media listening parties, in-store signing sessions, radio marathons, and its own segment on Obese TV.

After years of demographic observation, Pegz recognised the demand for a cultural hub in Frankston after noting a large portion of hip hop enthusiasts inhabited the bay side region. The decision was made to replicate a second retail store. Conveniently positioned at the heart of the township, the shop features an impressive wall piece by Melbourne graffiti artist Shem and will be open five days. Business hours are Tues – Sat 10am-5:30pm, and 10am – 6pm on Fridays. Besides vinyl, CDs, and the label’s own merchandise, Obese Records retail will stock street apparel and accessories from brands such as 1Line, Wu Tang, Burn Crew, and Kangol. Quality paints from Ironlak, Molotow will also be available to customers over 18, as well as a wide range of arts supplies, street art magazines and DVDs.

The store’s opening signifies an important time in local hip hop culture, where in the face of the demise of physical music sales across the industry, the hip hop community continues to support vinyl and CD production. With a highly productive 2013 and beyond planned, keep an ear out for upcoming Obese Records related events, and other announcements in the coming months.