Still buzzing from scoring a place in the triple j Hottest 100 with the track “So Good” and playing a host of summer festivals including Big Day Out, Allday releases his EP Loners are Cool, a sophisticated take on contemporary hip hop. Allday’s clever observational style and melodic lyrical flows slide over beats from the likes of producer One Above (Hilltop Hoods, Illy) to create Australia’s exciting answer to Drake or Frank Ocean. 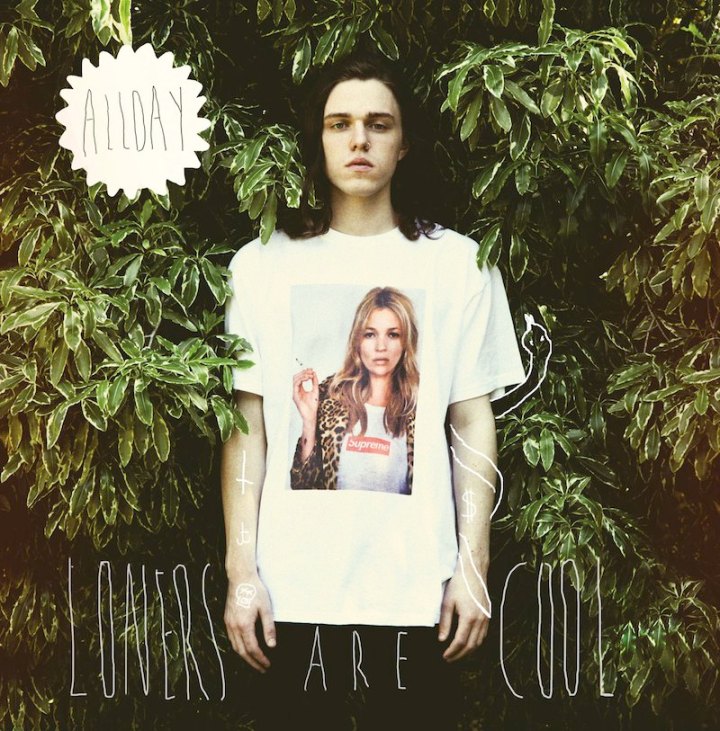 aahh: What a big 12 months it’s been for you, moving to Melbourne from Adelaide, appearing in the triple j Hottest 100 and also releasing a couple of mixtapes plus a brand new EP. Has this been the craziest 12 months ever?
Allday: Believe it or not it has been the least crazy 12 months ever, basically everything in the last 12 months has taken a lot of work and not a lot of partying. Looking back at every other year of my life and the various bad decisions I’ve made, this ranks as the tamest.

aahh: I want to ask you about your E.P A Skateboard Soiree. You teamed up with beatmaker C1, how did this relationship develop?
Allday: Actually he contacted me on Facebook and it went from there. He’d seen a video of me rapping into a webcam that was on youtube. We just kicked it, had similar interests and influences and we knocked the E.P out in about 3 weeks. He had just quit his job to focus on music and I’d just moved to Melbourne. Kind of seems like fate.

aahh: Did you expect the response you received for ‘A Skateboard Soiree?
Allday: Not at all, if we expected that to happen we probably would have spent a bit longer on it. At the time we just wanted to chuck something out for fun. I probably had 10 or 20 serious dedicated fans and I was basically doing it for them. Luckily Triple J liked it, some bigger artists like Bam Bam & 360 helped out and posted it and it got bigger than expected.

aahh: So Good, is a track that was really one of your break out tracks, it also appeared in the hottest 100 earlier in the year. What do you think it is about this track that people related to so much?
Allday: I think the theme, although it’s about mental illness kind of, is also kind of universal. Because the theme of the song is really ‘things aren’t perfect but I’m going to make a choice to deal with them and enjoy my life.’ Also it goes ‘mono mono mono’ and gets stuck in your head.

aahh: Moving on to the brand new EP, Loners Are Cool. What did you want to accomplish with this release?
Allday: Firstly I wanted to really make my song writing more direct and meaningful. Songs like Otto and That Phone Is A Brick are fairly polished as far as concepts and wordplay go and I guess I just wanted to test myself and go down that road. When I was writing the E.P I hit a wall where I didn’t know what to write about, I make pop influenced hip hop but I don’t want to say ‘having fun at the beach yada yada yada’, unless I can do it in an intelligent or a new way. I feel like I did that, and I made a better finished product than any of my older stuff. With that in mind though I feel like I can still get a lot better.

aahh: The debut single from the album features Brady James and is titled Girl In The Sun, tell us a bit about the track and clip, we hear you teamed up with a Swedish beatmaker for this one?
Allday: Girl In The Sun is a love song bout the early stages of a relationship. I guess I tried to capture that feeling when you’re just so deep that everything in your life seems like a movie montage. We went for a one take video because we wanted to keep it light and engaging. Woodz made the beat, he made two others on the E.P too. He hit me up about beats from Sweden, god knows how he even came across my music, and I loved his stuff.

aahh: Momo from Diafrix appears on a track titled ‘Single Mother Song’, what did he bring to this track?
Allday: MoMo just has a silky voice and is an amazing musician. I really wanted to get MoMo on the E.P because we became good mates after touring together. I learnt heaps about how to not only be professional but also be a good person from the Diafrix boys, definitely some of the best people I’ve come across in the industry.

aahh: One Above produces the track ‘That Phone Is A Brick’, what was it like working with him? He’s produced some amazing tracks lately.
Allday: One Above is an absolute monster, I bugged him for a bit to get beats even though he was too busy and probably didn’t want to give any to me. He’s actually from right around my area in Adelaide too and we have a lot of mutual friends. It’s crazy to have someone who musically talented in our scene and I definitely lucked out getting him on a beat.

aahh: You are currently on a ten date tour around Australia, tell us about that, is this your first tour of this size?
Allday: It is my first headline tour, I love getting to go different places and meeting fans. It’s definitely the easy part of being a musician. The difficult part is that my DJ Mikey Hundred and I are both legally retarded when it comes to maps and navigation so we end up exploring weird parts of the country. One time we also saw a guy do a hit and run in his car and we tried to chase him down instead of going to sound check.

aahh: You had the Adelaide launch held at the Ed Castle on the weekend, what was that like?
Allday: It was a pretty crazy show, the stage got rushed and a few people were going nuts. It’s always good to come home and hang in Adelaide. It definitely has a different vibe to other cities, but unless you’re from there it’s difficult to see its appeal sometimes.

aahh: Is there an album in the works? Where are you at with it?
Allday: I’m going to drop a free mixtape first then head toward an album. I just want to make sure it’s a really good product when I put it out. So I’ve basically recorded 0 tracks, written 0 tracks and locked down 0 beats. But it’s forming in my mind.

You can purchase Allday’s new EP, Loners Are Cool by following the link below. Allday is currently on his Girl In The Sun Tour. Appearing on the following dates:

You can also catch Allday on this years Come Together line up. Tickets are on sale for that today!