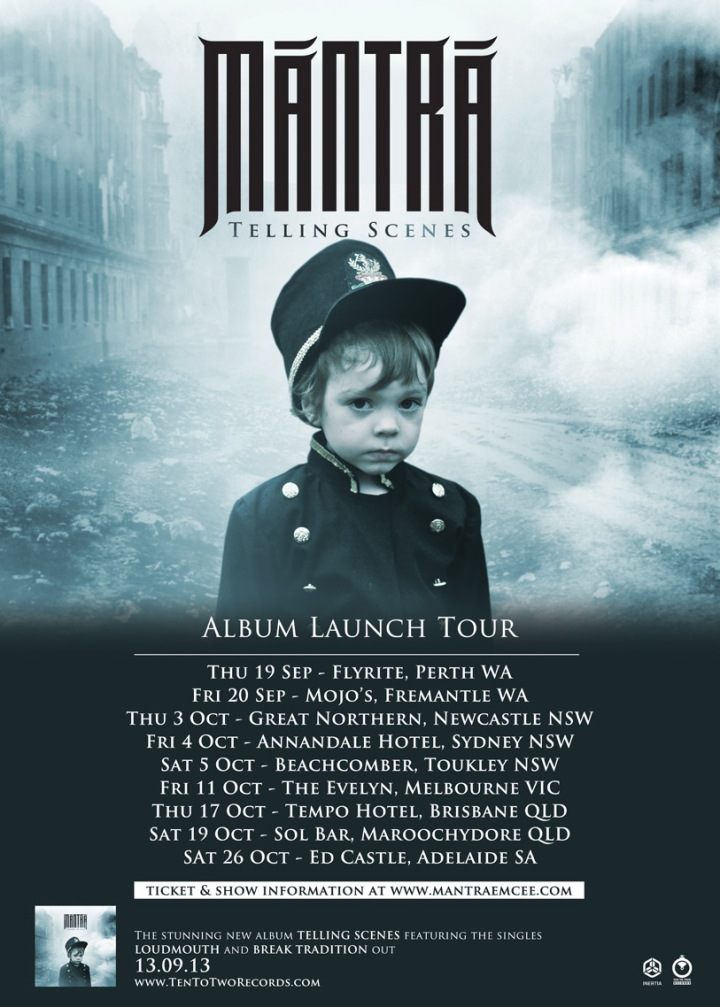 Due for release in September, Telling Scenes is an album in the most creative sense: not just a collection of songs, but an experience that takes its listener on a journey. As one part of this journey, Break Tradition represents a side of Mantra very close to his heart. Using dexterous rhymes to unfold stark and literal narratives, Mantra delves into the cycle of violence that sees the endless chain of one person passing their abuse on to the next, until someone makes the conscious decision to disinherit it. To break the tradition.

Whether fate or a self-fulfilling prophecy, Mantra knew Break Tradition was going to be something special even before he wrote it. Listening through a catalogue of beats by rising producer Cam Bluff, one in particular jumped out at Mantra, instantly resonating with him on a deep level. He knew he had to put something heartfelt on top of it.

By the time the song was complete, Mantra had unfolded some of the best rhymes of his career, added the multi-layered vocals of Melbourne’s Massive hip-hop choir, and capped everything off with a suitably grand chorus courtesy of Cisco Tavares. Powerful and relatable, Break Tradition had evolved into one of Mantra’s best songs, and had more than earned its place on his ambitious new album. As a cavalcade of this caliber of song, Telling Scenes confidently pushes the boundaries of hip hop, announcing in no uncertain terms that Mantra has reached the next level of his craft.

Mantra has just announced a national album tour to launch his upcoming release and third studio album, Telling Scenes on September 13, 2013 through Ten To Two Records. Joining Mantra on select dates is Melbourne’s Grey Ghost – tickets will go on sale Thursday 15 August, 9AM. Telling Scenes is an album in the most creative sense: not just a collection of songs, but an experience that takes its listener on a journey. With its emotional narratives, unpredictable twists and amazing cast, the album plays out like a great movie. In the director’s chair: one of Australia’s best and most-respected rappers.

Telling Scenes has already spawned two successful singles – radio anthem Loudmouth and the darker Break Tradition – but it is the album as a whole that best showcases how high Mantra has raised the bar. Epic and prodigious, Telling Scenes has delivered Mantra straight into the upper echelons of his craft. Catch Mantra as he performs around the country this September and October. All shows are 18+, for full tour dates check above.