A Summit of Music & Art

Sugar Mountain is an annually curated festival in Melbourne showcasing the best in contemporary music, visual art and new media, focusing on the natural meeting points between different mediums. 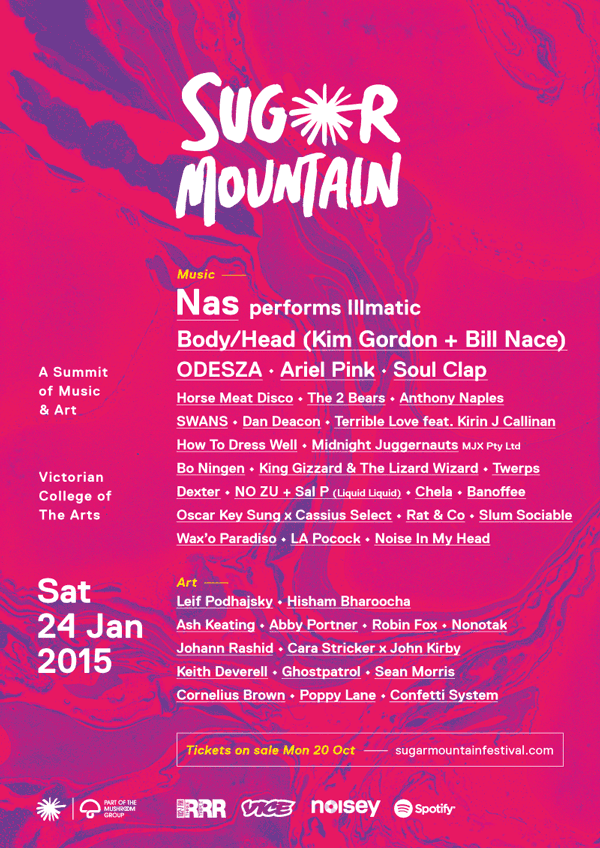 In 2015, it takes place at Victorian College of the Arts on Sat 24 January. It’ll run over five stages, three outdoor and two indoor.

Above all Sugar Mountain is a place for creativity to be absorbed and celebrated. The festival curators are determined to create an environment that is convivial and interactive, with performances and spaces that will remain with the audience long after the festival finale.

Sugar Mountain is the brainchild of Tig Huggins, Pete Keen, Brett Louis and Nicci Reid. It has taken place in Melbourne, Australia, since 2011. After three instalments in the city’s iconic live music institution The Forum, Sugar Mountain joined forces with Melbourne’s iconic Mushroom Group and took a year off before returning in a much grander format at its new home at Victorian College of the Arts.

Could this mean Australia will also Nas tour Australia early next year? We hope so.