Bliss N Eso continue to pave the way as one of the most ground-breaking bands in Australia with the release of their highly-anticipated new collaborative watch with G-Shock.

Bliss N Eso cemented themselves as one of the country’s biggest groups with the 2013 release of their certified Platinum #1 album ‘Circus in the Sky’ and 2014’s record-breaking outdoor Australian tour (the biggest by any local hip-hop artist ever).

Joining the ranks of some of the biggest artists in the world, including Eminem and the Wu-Tang Clan, Bliss N Eso become the first Australian act to collaborate with Casio’s iconic G-Shock brand. The inspiration behind the watch’s design stemmed from one of the band’s most quoted lines, “time stops still in the eye of the storm” from a fan favourite single, 2008’s ‘Eye of the Storm’.

G-Shock’s most iconic model – the DW6900 – was selected as the base model around which to create the collaborative timepiece. The camouflage pattern on the watch’s band is a nod to Bliss n Eso’s life-changing trip to Afghanistan with the Australian Defence Force in September 2013.

The announcement of the collaboration between Bliss n Eso and G-Shock came in April 2013 during G-Shock’s 30th anniversary party in Melbourne. The limited edition watch was officially unveiled at Cockle Bay Wharf last week at an invitation-only event. 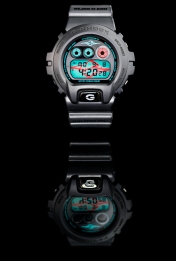 The official launch saw the watch delivered onto a display by a custom built quad copter drone following a two minute video which includes state-of-the-art animation and special effects. The Bliss n Eso x G-Shock collaboration timepiece is limited to 1000 units worldwide and will be available in stores and online (250 pieces) from today (October 15) at 9:00am. You can pick up this brilliant timepiece here.