Last week G-Shock Australia kicked off its 30th Anniversary Celebration at the Prince Ballroom in Melbourne’s St Kilda. Bliss N Eso, DJ Krush and Yo Mafia hit the stage in a private concert for VIP guests. The venue was decked out with limited G-Shock watches and a collection of watches dating back to 1983. G-Shock also announced its first collaboration for the Australian market with local Hip-hop artists Bliss N Eso. 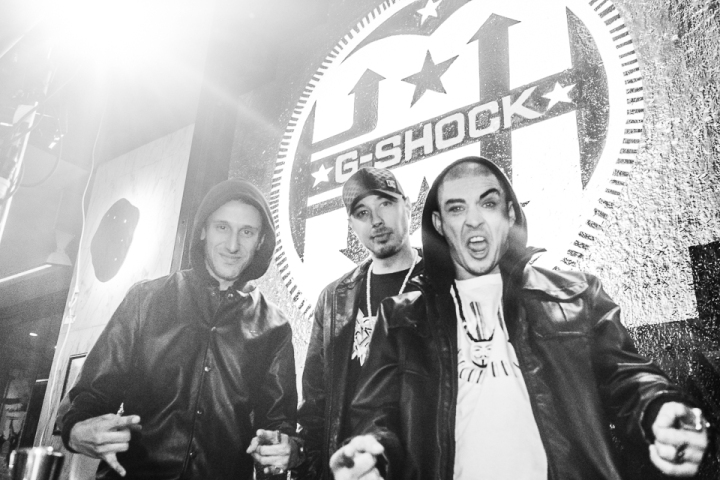 We catch up with Bruno, Marketing Manager for Casio Timepiece, as we discuss 30 successful years in the industry.

aahh: What does an anniversary such as this, 30 years in the market, mean to brand G-Shock?
Bruno: To put it simply – 30 years for a fashion brand not only means longevity – it also means credibility. You can’t be around for three decades without doing something right.
The anniversary party gave us a chance to reflect on the past and look towards the future. Walking around the room it was incredible to be reminded of G-Shock’s knack for innovation. There was a G-Shock that took your blood-pressure … there was one with a built-in pokie machine … there was also one that did Morse code! This year G-Shock just came out with their Bluetooth model … it basically hooks up to your iPhone and lets you know when people are calling you, emailing you and hitting you up on social media. If that isn’t innovation – I don’t know what is!

aahh: To celebrate the 30th anniversary, there have been numerous parties worldwide. Australia’s launch went down in Melbourne. Why was it important to celebrate this event worldwide?
Bruno: Although G-Shock’s are designed by Japanese-based engineers – it’s always been important to make G-Shock a global brand rather than a region-specific brand. The guys at our head-office in Tokyo are good when it comes to giving every country creative control. They basically say – “you understand your own market better than we do – so go nuts.”
A G-Shock party in Italy – for example – is a lot different from a G-Shock party in Australia. I was watching some of the footage from the Italian party – people were sitting down at tables and politely eating dinner with knives and forks … good on them – that’s there scene. Here in Australia – though – our party was about live-music, scoffing down food and having (quite a few) drinks.

aahh: G-Shock have constantly been a leader in fashion for men’s watches. What is it about the brand that you think has led to its success over the past 30 years?
Bruno: I reckon that G-Shock’s success over the past 30-years can be put down to innovation. I don’t know any other brand that’s constantly coming up with new models and taking risks when it comes to danger. It seems that every month G-Shock is announcing new concepts and collaborations. Last week I did the maths – since ’83, G-Shock have released a watch every 6.7 days … crazy, right?

aahh: A number of special releases are being brought out in celebration of this milestone. One that caught our eye was a collaboration with Shoe maker Supra. Can you tell us a bit about this?
Bruno: A month ago I was in Japan and they showed me the GA200SPR (which is the fancy technical way of referring to the G-Shock x Supra model). It’s one of the most stunning watches I’ve ever seen. Those designers at Supra and G-Shock came up with a winner of watch.
Here in Australia we’ll be getting about 70 of them next month.

aahh: There are a number of musical performances announced to play in Melbourne at the 30th anniversary bash?What relationship does the brand share with musical creatives?
Bruno: G-Shock has always had a very close relationship with music. In the US – G-Shock enjoys a close relationship with Eminem and the Wu-Tang Clan. In the UK it’s with Coldplay. Here in Australia – we’re pumped to be aligned with Bliss n Eso.
Whether designing a watch or putting an album together – you’re using the same creative-side of your brain – that’s why G-Shock shares a special bond with artists.

aahh: What other ways are G-Shock marking this historic event for the label, we hear possible news of the first ever Australian Collaboration?
Bruno: Absolutely. We’ll soon be taking the boys from Bliss n Eso to Japan … they’ll be sitting down with our top engineers and designing their very own watch. This has never been done in Australia before – so we’re all extremely pumped about finally being able to do this.
The watch will come up in early 2014 and will be limited to 1,000 pieces.
I grew up as a huge fan of Bliss n Eso. I remember sitting under the Indooroopilly bridge in Brisbane, listening to the Culture of Kings compilation on my minidisc player and having this light bulb moment where I was like “these boys get it.” Fast-forward a few years, when it came time for G-Shock to formally align itself with a group – it was a no-brainer. These boys are innovators and creatively brilliant.

*Photos are shot exclusively for allaussiehiphop.com by Michelle Grace Hunder. Check out more of her fantastic work here.