Australian music fans are in for a once-in-a-lifetime experience when turntablists supreme, DJ Shadow and Cut Chemist, celebrate the legacy of hip-hop vanguard and Universal Zulu Nation founder, Afrika Bambaataa, with the Renegades of Rhythm tour. 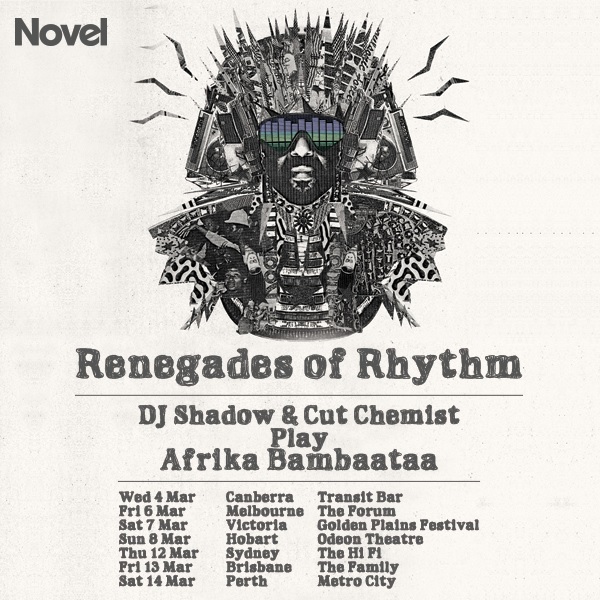 This vinyl-only tour will see the two maestros utilize 6 decks and real-time effects to honour Bambaataa’s influence on hip-hop’s beginnings through handpicked selections, all taken from his original and highly influential record collection.

“This has never been done before, definitely not on this scale. They’re HIS records, with his blessings. This isn’t just ANY copy of ‘X’ breakbeat, it’s THE copy, THE copy that started everything. Not just any records, the MASTER OF RECORDS’ records.” – DJ Shadow.

The aim with this tour is to not just to focus on one specific sound, but to present Bambaataa’s legacy in all its genre-busting and socially-minded complexity. DJ Shadow states, “His collection includes not just Soul and Rap, but also Soca, Calypso, Dub, Salsa…it’s obvious that this music was important to him, and it’s reflected in his own music. For example, when the Soulsonic Force is singing an African chant, it actually comes from a Manu Dibango record. That’s when being a crate-digger comes in handy – you have to be able to pick up on the references and reiterate them.” 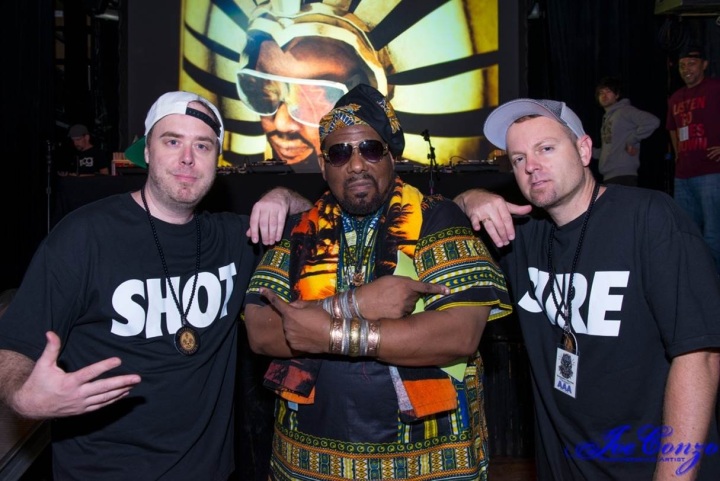 Sorting through the collection with this holistic aim in mind was daunting. “The first sort was to make sure we didn’t leave anything important behind. We definitely over-pulled,” adds Cut Chemist. To help them narrow their selections, DJ Shadow and Cut Chemist focused on the appearance of the records themselves, “It was pretty clear what he played a lot and what he didn’t. The sure-shots were covered with tape and the jackets were beautifully tattered; that made it easier after a while to pull records.”

Naturally, it was paramount to the two DJ’s that the tour has the full blessing and support of Afrika Bambaataa himself. “I call on all who love Hip-Hop to come out, see them, hear them,” says the Godfather. “My story is our history in DJing.”

The Renegades of Rhythm tour will use six turntables and a variety of real-time effects. “It adds another performance level, real-time sampling from the record that’s being played,” says Cut Chemist. Visuals for the tour will be supplied by acclaimed video director, multimedia producer and regular DJ Shadow collaborator Ben Stokes.