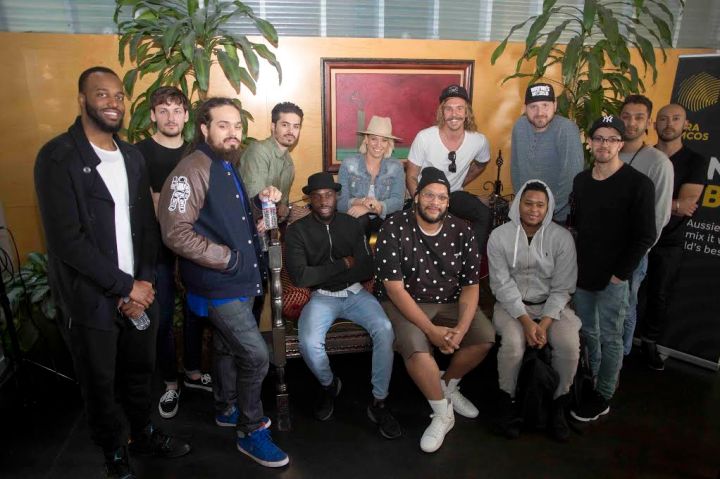 Supported by the Federal Government, SongHubs launched in 2013 and showcases the Australian music talent on an international level. To date SongHubs have been held in Australia, the United States, England, India and Sweden, delivering over 200 new musical works. From these workshops there is at least ten commercial recorded releases and live performances with many more in the pipeline.

Multi-media entertainment platform 1916 will be curating SongHubs LA. Co-founded by Lex Borrero and Jonathan Gordon, 1916 allows creative individuals and entrepreneurs to build their careers and business with the help of experts. Managing top songwriters, producers and artists in the business, 1916 are accruing numerous hits under their belt, such as ‘Stereo Hearts’ Gym Class Heros, ‘Clique’ by Big Sean Ft. Kanye West and ‘Video Games’ by Lana Del Ray.

While in town for his 2015 Grammy nomination, Australian producer M-Phazes will join the line-up of Australian songwriters and producers for SongHubs LA. The three-time ARIA winner for Best Urban Release has worked with international and local artists such as Eminem, Meg Mac, Illy and Kimbra.

Other attendees include songwriter Joel Chapman, his recent work on 5 Seconds of Summer’s hit ‘Beside You’ saw it top the Australian and US charts. Lead singer and songwriter for multiplatinum electronic dance group the Potbelleez, Ilan Kidron who also is the 2014 ASCAP Award Winner for top pop release for Ricky Martin’s ‘Come With Me’. Former X-Factor contestant Nathaniel who’s debut single ‘You’ was the most played song in Australia for two consecutive weeks as well as hitting the number one position on the Shazam Charts and songwriter Hayley Warner who wrote Reece Mastin’s five-time Platinum single ‘Good Night’ which was Sony Music Australia’s fastest selling digital single in 2011.

LA based APRA AMCOS members; More Mega (Cassie Davis and Sean Ray) will also be taking part. They are the songwriting duo behind the Havana Brown smash-hit ‘We Run the Night’ and recently have been working with UK group Neon Jungle.

International guests include Grammy award winning production and songwriting teams The Monsters and The Strangerz which features Alexander “Xplicit” Izquierdo, Stefan Johnson, Jordan Johnson, Marcus “Marc Lo” Lomax and Clarence Coffee Jr. Previous work includes the Maroon 5 hit ‘It Was Always You’ and they have worked with the likes of Diddy, Kanye West, Rihanna and Maroon 5.

Rounding off the list are two songwriter and producers who between them have worked with some of the worlds biggest stars. American, Marty James (Snoop Dogg, Nelly, Akon) best known for his work with Enrique Iglesias and Danish songwriter and producer Jonas Jeberg (Pussycat Dolls, Nicky Minaj, Kylie Minogue), have both been confirmed for the LA event.

SongHubs provides collaborative opportunities for both published and unpublished Australian songwriters and composers with international talent, irrespective of genre. SongHubs will run in Los Angeles from 2 February – 6 February 2015. For further information on the program, please visit the APRA AMCOS website.