Ghostface Killah and Adrian Younge have joined forces again for a new album titled, 12 Reasons To Die II, which will be available July 10th, 2015. The new album is a sequel to the duo’s 2013 releases 12 Reasons to Die (PART 1) and will feature Rza, Raekwon, Bilal, Vince Staples. 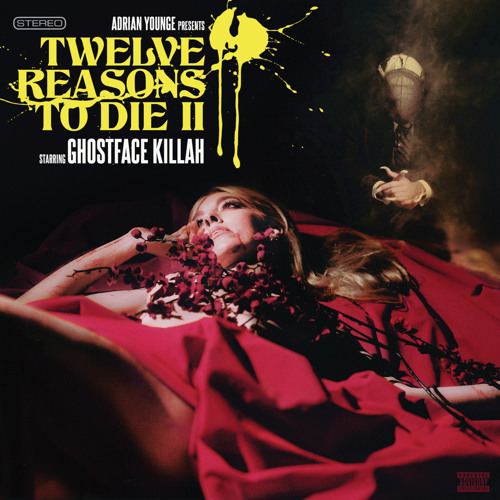 The Mafioso concept album is entirely composed, produced and performed by Younge and told through Ghostface’s visceral rhymes. The storyline has officially developed into a cinematic album series with this project serving as the darker and more sinister predecessor to part 1, musically taking inspiration from vintage Italian horror scores with classic Wu Tang Clan production.

The lead track off the album, ‘Return Of The Savage’, features appearances by Ghostface Killah’s Wu-Tang Clan band-mates Raekwon and RZA, and was premiered on Pitchfork.

Recorded entirely on analog tape for the warm texture of old soul vinyl albums, Adrian’s vintage sound is a breath of fresh air on this LP, beautifully complimenting Tony Starks classic story telling. While Rza has been enlisted to narrate the complex storyline, Raekwon appears as one of the album’s main characters. 2015 marked the 20th anniversary of Raekwon’s critically lauded Hip Hop album, Only Built For Cuban Linx, which featured Ghost.

12 Reasons To Die II is set in the grimy streets of mid-1970s New York City. Descendants of the DeLucas are running the city but a new and powerful crime syndicate is rising, commanded by black gangster Lester Kane (personified by Raekwon). As his power grows, Kane takes on the DeLucas and a war ensues. Kane has always known the legend of Tony Starks, who was killed by the DeLucas in Italy (in part 1), and whose remains were partially used to create twelve vinyl records. When played back in the “old world”, the Ghostface Killer rose and destroyed the Italian faction. Enter 12 Reasons To Die II.

Pre-Order The Album now via iTunes or  JB Hifi Or pick up the deluxe packaging here.