Here we have a brand new track to celebrate the partnership of local clothing label Geedup Co. and the appointment of their official American Ambassador, hip hop artist J57. 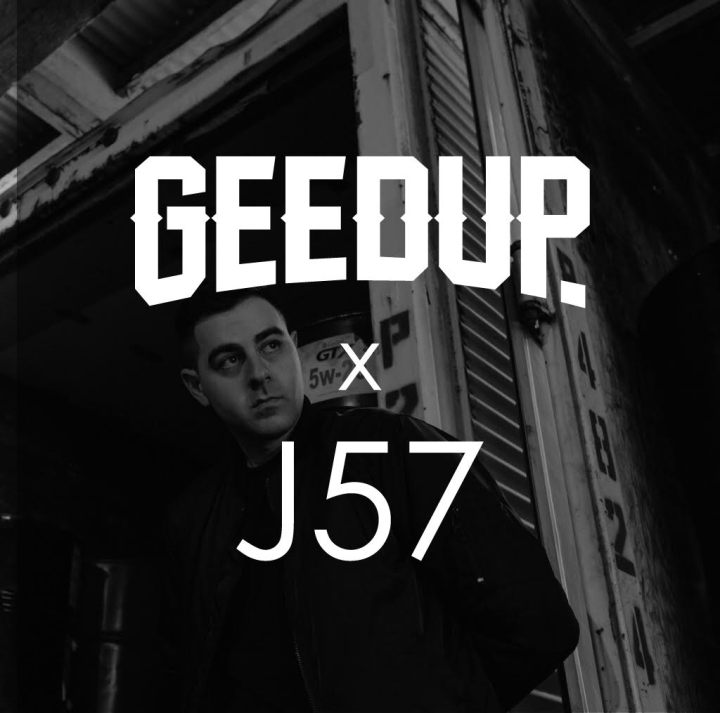 You may know J57 as an emcee & producer, who was born & raised on Long Island, NY. He worked at Fatbeats from 2004 to 2010 and is a member of the group Brown Bag AllStars. He has worked with the likes of Kendrick Lamar, Joey Bada$$, Action Bronson, Wu Tang, The Roots, Torae, Sia and more…

Geedup Co. need little to no introduction. Born out of Sydney, Geedup lead the way locally for quality and original street wear. Born in the Summer of 2010, ‘Geedup’ went from a phrase used on the street, to a label orchestrated by a tight-knit group of young entrepreneurs who began developing garments for the wider community. Driven by the same dreams and energy that shaped hip-hop in the ’90s, graffiti in the ’80s and crime families in the ’70s, these designs became a godsend for those who could relate to similar lifestyles.

The Geedup vision incorporates a strong sense of belonging, loyalty, strength and individuality. The personal experiences from those at the forefront of this dream cultivated a savvy label that still rocks a street aesthetic. Through the initiative of two brothers and a friend, this quickly turned into a brotherhood – tight-knit to this day.

Talking to Beau, the Co Founder and Brand Manager at Geedup Co. we found out all about how this brilliant partnership was born. This is what he had to say:

“Jay actually caught wind of us back in December 14 after hearing our collab song with Thundamentals, he got in contact with me saying he loved the beat (produced by Poncho) and that he also loves the gear. Here came out here (to Australia) to do a bunch of work with some local Hip Hop artists as well as Joey Badass and a few of the Pro Era cats. Anyway, we were doing an interview with J57 in store at our Darlinghurst spot, we then went to go grab a whiskey and a bite to eat down at Darling Harbour, in the middle of which Jay got a phone call from Joey Bada$$ asking if we had a studio they could record in. So, I made a few calls and locked Signacion studios down in Chippendale for the night.
We ended up boosting in there all night with Joey, CJ Fly, Statik Selektah and laid down a couple tracks. Joey and Jay got talking about Geedup, and we ended up with the whole crew in the store drinking Hennessy and Johnnie Walker the next day. So we went on to continue to build a friendship and business relationship with J57, and we have now brought him on board as the official American Ambassador for Geedup Co. He will be acting on behalf of us, as a point of contact and to build a network infrastructure. This song had been titled as ‘Geedup’ as a release to announce his appointment in our company”. – Beau (Co-Founder & Brand Manager Geedup Co.)

Here’s what J57 had to say about the new partnership:
“I’m honored to announce that I’m now the American Brand Ambassador for Geedup Co., a very dope clothing company based in Sydney, Australia. In celebration of this announcement, we decided to release a new instrumental track of mine, named: Geedup! I’m not the first American hiphop artist to rock their gear; Freddie Gibbs, Joey Bada$$, Statik Selektah, and CJ Fly have as well, just to a name a few…” – J57

Check the new track below, available now as a free download. Be sure to head over to Geedup Co. Official Website to peep some of their styles.