If you’re into gritty hip hop that comes from a real place, you’ll already be across Rates. Describing his 2013 debut album Destroy And Rebuild (which peaked at #9 on iTunes’ Australian Albums Chart) as his “ode to hip hop”, Rates now brings something completely different to its follow-up. 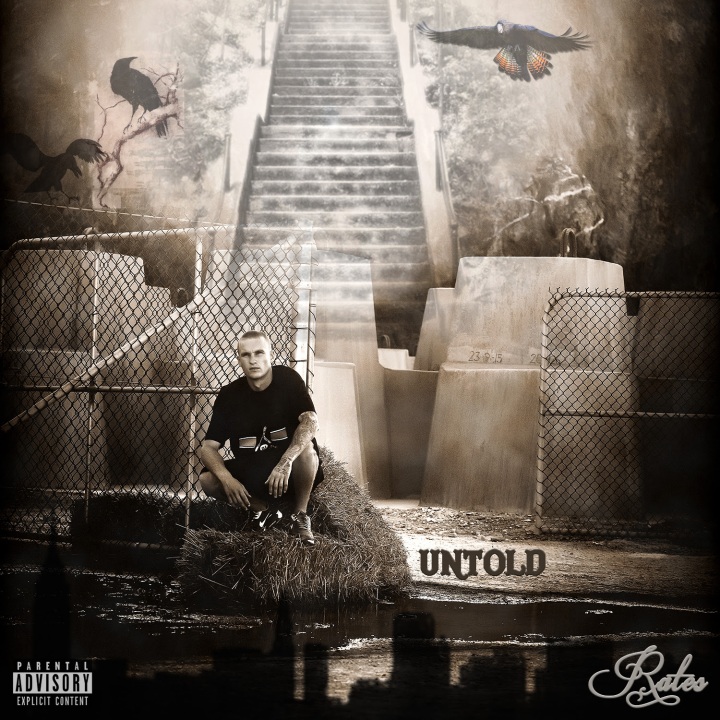 Untold sees Rates blending lyrically sharp rhymes (think Big Pun and Tech N9ne) with a big, creepy sort of sound musically (Rates: “Deftones are a big influence for me”). All tracks for this new release, except for Suicide 2, were written collaboratively with Bennie On The Beat at the producer’s Coffs Harbour studio; lyrics written alongside beats during their creative process. Untold will be released Friday May 27 via ABK Records/ADA Distribution and is available for pre-order now, along with an iTunes instant grat of new track The Enemy.

Album opener and lead single The Enemy unfolds with sparse, echoing piano beats that ushers in a sample from the movie Bandits – “May I please go back to prison?” Response: “Not yet.” Straight up, a harrowing tone is set. “My goal with the track was just to wake people up,” Rates says. Raising awareness about situations that listeners might not hear about or understand is important to this spirited emcee on the rise.

A complete U-turn is made just before Untold’s halfway mark when Berserk charges in like an angry game changer, challenging the “gronks” that stain our current hip hop scene. Wonky, insistent beats underscore fast-paced flow that leaves no space for retort.

Later on in the record, A Letter is penned for Rates’ younger brother, Kerser: “Funny we talk to the beat more than we ever told each other.” This cut is bookended by excerpts from past Kerser interviews during which the rapper reveals plans to start his own record label. Fast forward to now and Untold is the second album release on Kerser’s label (ABK Records); the first was Kerser’s Next Step (2015). Rates enthuses, “[The label is] something we’ve wanted to set up all of our lives,” before adding, “So when we were making [Untold] that passion was definitely there”.

Both Kerser and Big Hustle join Rates for celebratory track Life I Lead, which documents the crew’s enviable popularity and continued success. Suffocated by the music industry and snubbed by radio, the brothers’ fanbases continue to expand and Life I Lead’s triumphant, shimmering keys underscore this factual, inspirational tale: “Why would the ARIAs like me, when they never live the things I seen?”

Rates doesn’t shy away from rapping about his demons. “Over the years [music has] definitely defined who I am now,” he tells. “I mean, since I was a kid I woke up with a song in my head and would go to bed with a song in my head, you know? And I’m still obsessed with music.” So can Rates imagine life without music? “I’d go mad. It’s all I know… It’s everything, music.” On his second album Rates tells us how it is, leaving nothing Untold.