‘Drinking From The Sun, Walking Under Stars Restrung’ album became HILLTOP HOODS fifth #1 album on the ARIA Chart and features platinum selling ‘Higher’ FT James Chatburn and four-times platinum single ‘1955’ FT. Montaigne & Tom Thum. The release was celebrated with The Restrung Tour in 2016 where HILLTOP HOODS headlined arenas with Australia’s best orchestras and choirs conducted by Hamish McKeich. Off the back of the album, HILLTOP HOODS initiated the Through The Dark project with Google Play resulting in an astonishing 6 awards at the Cannes Lions Festival of Creativity including the FWA People’s Choice Award. The ARIA award winning ‘Drinking From The Sun’ was released in 2012 and is HILLTOP HOODS fifth studio album. Debuting #1 on the ARIA Album Chart it went on to sell double-platinum in Australia and features four times platinum single ‘I Love It’ FT Sia. The double-platinum, #1 ARIA debuting album ‘Walking Under Stars’ was released in 2014 and won the Hoods another ARIA award for Best Urban Album. Included on the album is platinum single ‘Won’t Let You Down’ and their five-times platinum selling ‘Cosby Sweater’. 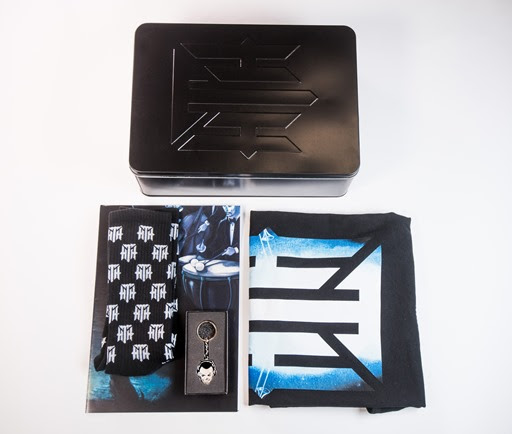 The must-have boxset includes the Hoods #1 ARIA charting albums ‘Drinking From The Sun’, ‘Walking Under Stars’ and ‘Drinking From The Sun, Walking Under Stars Restrung’. All three albums have been pressed as 2- LP and 3 – LP sets (7 records in total) on exclusive 180 gram coloured vinyl for maximum sound quality then packaged with a hard cover book and housed in a slip-on case with lenticular cover. The 36- page book features artwork from the past three albums and exclusive images taken form HILLTOP HOODS 2016 SOLD OUT Restrung Arena Tour. The boxset will also include an individually numbered and signed print plus a download card for all three albums.

To celebrate the deluxe boxset, brand new exclusive merchandise has also been crafted for today’s release. The limited edition bundles are exclusive to HILLTOP HOODS store and available here.

HILLTOP HOODS have just finished their highly successful Nth American Tour and heading back into the studio, with new music to be released next year.