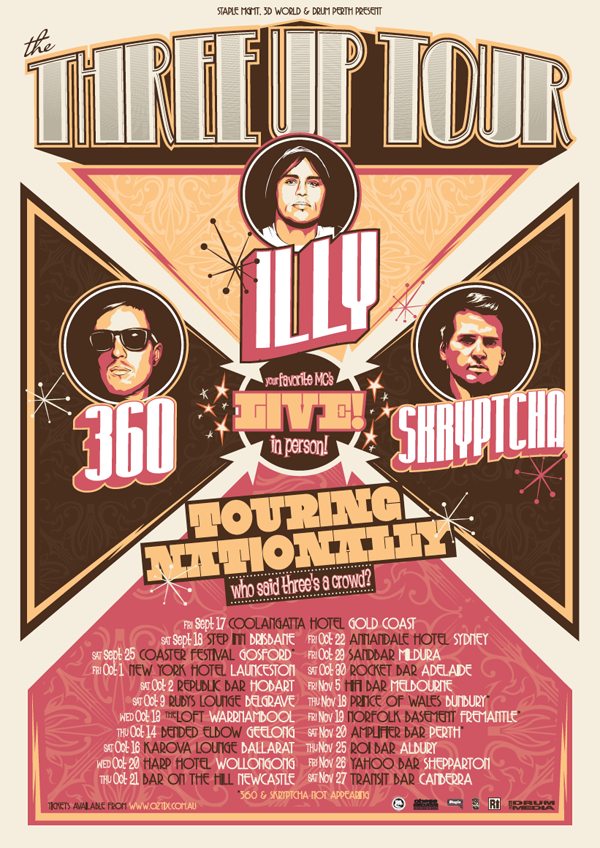 Showcasing three of the country’s most talented emcees, the nationwide Three Up Tour brings Illy, 360 and Skryptcha to cities and towns across Australia starting this September.
Fresh from the success of his Triple J Hottest 100 listed single (#66) Pictures and stints on the most recent Groovin’ The Moo festival, Illy is set to showcase hits from his debut album Long Story Short alongside brand new tracks from his much anticipated second album. Slated to hit stores later this year via Obese Records, the Three Up Tour will be your first opportunity to hear his latest material.

Melbourne rapper 360 came to the public conscience featuring on the Pez track The Festival Song and since has toured with the likes of Bliss N Eso and Drapht. His latest single, Throw It Away features a special guest appearance by Josh Pyke. Expect this multi-talented indie rapper to bring his patented wit and humour to the stage.

Rounding out the bill is Sydney’s Skryptcha. Having just released his acclaimed debut album The Numbers, Skryptcha brings his love of old-school hip hop to the masses with his Triple J-added single Get Mine.
The tour kicks off September 17 in the Gold Coast before heading around the country, wrapping up its run late November in Canberra. Tickets on sale Friday the 13th of August.

One thought on “The Three Up Tour”